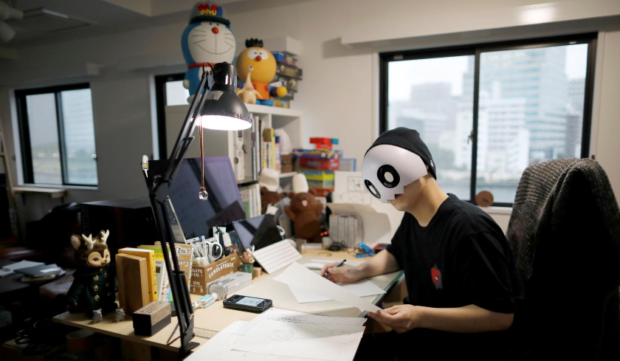 TOKYO — Manga artist Kamentotsu didn’t expect much when he uploaded a four-panel strip about an anthropomorphic bear who runs a cake shop to his Twitter account three years ago.

But the first installment of “Koguma’s Cake Shop,” drawn as consolation for a tired friend, attracted tens of thousands of likes. Within a week, 40 companies had approached him with offers.

“Publishing company editors have gone from bringing up manga artists, like they are farming, to hunting for them,” said Kamentotsu, who goes by his pen name and wears a mask in media appearances.

By searching for talent online, publishers squeezed by the rise of the internet can see an artist’s audience potential out in the open.

For Japan’s striving manga artists, many of whom toil in obscurity for low pay, that means going viral can be life changing.

Kamentotsu’s strip, which is published by Shogakukan, has gone on to sell more than half a million books. The titular bear, who wears a chef’s hat, has become a popular soft toy and its image was used to promote frozen dumplings.

Japanese pop culture is piled with such cute, memorable characters.

Industry observers say that a feel-good style – known as the “iyashikei” or “soothing” genre in Japanese – is particularly fitting online audiences.

But other recent hits are quite a bit darker, such as “Jujutsu Kaisen” and “Demon Slayer.”

Kousuke Oono’s “The Way of the Househusband” has a high concept idea: a feared yakuza gangster – tattooed, clad all in black but wearing an apron – quits crime to take care of the home while his wife works.

“A comedic story with easy-to-understand characters and title is suited to the internet… we thought about that from the planning stage,” said Arimasa Nishikawa, an editor at manga site Kurage Bunch, which first published the strip.

“Househusband,” popular on manga apps and in print, plays with gender stereotypes at a time of social change in Japan. A line of aprons has been a hit with fans.

The strip has been made into a TV drama, with an animated version set to stream on Netflix this year.