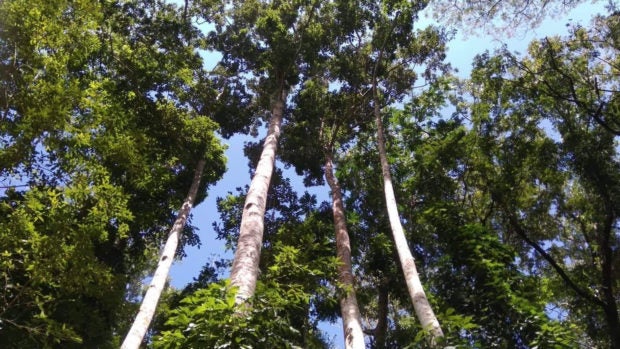 Dipterocarp or lowland rainforest trees, such as these in Mt. Makiling in Laguna, are essential, not just for the economical value, but for their ecosystem services and cultural value. Photo courtesy of Ma. Rovelyn D. Tumaneng and Roven D. Tumaneng.

MANILA, Philippines — Climate change adversely affects certain species of Philippine hardwood trees, such as yakal, apitong and tanguile, as the warming planet continues to make particular areas unsuitable for their growth, according to species distribution models created by scientists from the National University of Singapore.

In a study published in the journal Scientific Reports, the researchers also discovered that the lowland forests suitable for these trees, also known as dipterocarps, fall largely outside the current delineations of the country’s protected areas network.

A critical tree family in the Philippines and in Southeast Asia, the dipterocarpacaea has over 600 species of mainly lowland forest trees and is considered a major component of tropical forests in the region.

Researchers looked at the distribution of 19 species of dipterocarps in the Philippines, including the yakal (Shorea astylosa), apitong (Dipterocarpus grandiflorus), guijo (Shorea guiso), hagakhak (Dipterocarpus validus) and white lauan (Shorea contorta). Many of these trees are already considered vulnerable, while some are critically endangered.

Using species distribution models, the scientists mapped the existing dipterocarp species across the country. Results showed that land cover correction, or correcting the maps to show areas suitable for the growth of the trees, has already reduced their distribution by a median of 67 percent. Those within protected areas, which are enshrined under a law, decreased by 37 percent.

Some of the greatest losses, the study noted, were in Southern Luzon and Northern Visayas.

Lead author Sean Pang said that while deforestation and land use has already decimated a great number of these trees, this situation can be further worsened by rising temperatures that are not suitable for their survival.

“Whatever is left, they will be put under a lot of pressure because of climate change,” he said in an interview with Inquirer. “A lot of places where the dipterocarps are will be quite inhospitable for them in the future.”

While certain existing locations will remain suitable, some trees may shift to higher elevations where the temperatures are not as hostile for their growth, said Jose Don de Alban, the report’s coauthor.

“Whatever is left, they will be put under a lot of pressure because of climate change,” he said in an interview with Inquirer. “A lot of places where the dipterocarps are will be quite inhospitable for them in the future.”

As the planet warms, he said, these lowland trees may soon start moving up to higher elevations, such as on mountaintops. These areas, however, are already home to different species of trees.

“The space on the top of the mountain is smaller, and so as they go up, the space that they occupy is smaller,” Alban said.

The study also highlighted a “critical gap” in the Philippines’ protected area system, which scientists discovered only covers a relatively small portion of suitable habitats for dipterocarps at present. Similarly, they also have low coverage of areas for these trees under climate change scenarios. 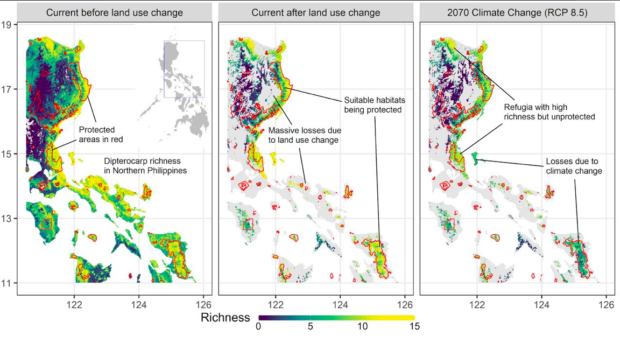 Species distribution models created by scientists from the National University of Singapore showed huge losses of dipterocarp ranges due to deforestation. Much of the most species-rich areas projected by 2070 are also outside the current protected areas network in the Philippines. Maps courtesy of Jose Don de Alban.

“Areas of high dipterocarp richness that were left unprotected included the lowlands of northern and southern Sierra Madre and Cordillera mountain ranges for the Greater Luzon region,” the study said.

Pang said that the study highlights the many opportunities for the Philippines to expand its current protected areas network to include areas that are suitable for the growth of lowland trees.

Their report, said Alban, could help inform current and future conservation efforts, since any changes in the species will have cascading effects on forest habitats and wildlife.

As hardwood trees, dipterocarps are often used for timber. Beyond their economical services, however, they also serve as habitat for wild animals and are integral part of watersheds, said Edward Webb, the research’s principal investigator.

“They also have cultural value for the countries they are endemic in,” he added.

With remaining forests only covering around 20 percent of the country’s total area, Alban said much has to be done to conserve them.

“If we lose what’s left, it will take time for these forests to go back,” he said.