MANILA, Philippines — International internet speed monitoring firm, Speedtest by Ookla reported an increase in the country’s fixed broadband average download speed and a slight dip in the mobile network internet speed for the month of March.

According to Speedtest’s Global Index report, the country’s ranking improved by another 11 notches globally, after an increase of eight notches in February.

The Philippines now ranks 81st among the 177 countries tested on fixed broadband speed. 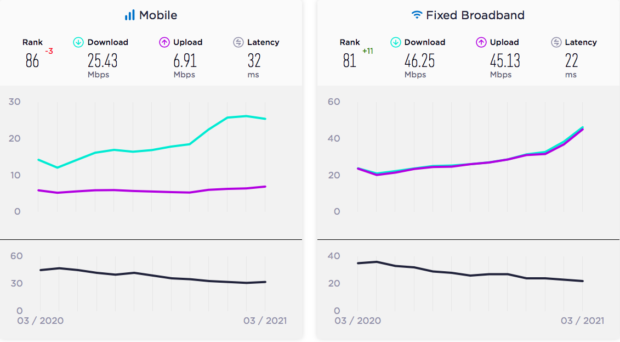 The country’s improvement in rank in March is the second-best globally, next to Oman’s.

However, the current mobile network performance still represents an increase of 241.80% from its speed of 7.44Mbps back in July 2016, while the average mobile download speed of 24.72Mbps from January to March this year also represents a 29.22% improvement from the 19.13Mbps posted in October to December 2020.

Massive improvements in mobile speeds in previous months were also noted when the Philippines’ global rank in December 2020 went up 14 notches and up by another 10 notches in January 2021.

Out of 140 countries, Philippine mobile speed was at 86th spot in January 2021 from 111th in the same period in 2020, outpacing countries like Russia, Malaysia, and Indonesia.

In Asia, the marked improvement in internet speed places the country at 22nd ranking for fixed broadband and 27th for mobile out of 50 countries.

In Asia-Pacific, the Philippines ranks 16th for fixed broadband and 15th for mobile out of 46 countries.

The country now ranks 5th for fixed broadband and 7th for the mobile network out of 10 ASEAN countries.

The improvement in the country’s internet speed comes after the President’s directive last July 2020 on the need to expedite the facilitation of LGU permits in relation to building cellular towers.

Since then, there has been a significant increase in the issuance of permits from July 2020 to March 2021.

ICT advocacy groups, however, were quick to question why only a small number of smartphones are compatible with the third telco’s network services and why it chose to begin operations in rural areas where most customers do not own smartphones.