Tesla can be fooled into unmanned driving – report 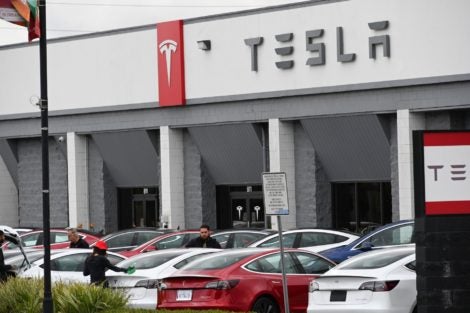 New York, United States — Tesla came under renewed scrutiny Thursday following a report its cars could be fooled into driving with no one behind the wheel and as two senators demanded a federal probe of a recent crash.

Engineers from Consumer Reports “easily tricked” Tesla’s Autopilot to drive without anyone in the driver’s seat, “a scenario that would present extreme danger if it were repeated on public roads,” the magazine said on its website.

Meanwhile, Democratic Senators Richard Blumenthal of Connecticut and Ed Markey of Massachusetts urged the US auto safety regulators to forcefully respond to a fatal car crash in Texas last weekend involving a Tesla that apparently had no one behind the wheel.

“We implore you to conduct a thorough investigation of the accident and request that your reports include recommendations on corrective actions that can be implemented to prevent future such accidents from occurring,” the Senators said in a letter to National Highway Traffic Safety Administration acting chief Steven Cliff.

The senators applauded NHTSA’s prior announcement that it, along with the National Transportation Safety Board, were investigating the crash.

The accident, which led to two fatalities, involved a Tesla Model S that caught fire after hitting a tree late Saturday night near Houston.

Harris County police official Mark Herman told local media the initial investigation found no one was in the driver’s seat of the vehicle. One of the victims was discovered in the passenger seat, and the other in the back seat.

The circumstances of the accident have revived debate on the electric car’s existing semi-autonomous capabilities, such as Autopilot, which allows the car to park on its own or navigate on the highway.

Tesla Chief Executive Elon Musk said data logs show Autopilot was not engaged during the crash. The automaker warns that its driver assistance systems do not make the vehicles autonomous, and  active supervision is still required.

In its test, a Consumer Reports placed a weight on the steering wheel and maneuvered over to the passenger seat without undoing the seat belt.

“There were no warnings that no one was sitting in the seat, no one was holding the steering wheel and no one was looking at the road,” Consumer Reports’ Jake Fisher said of the test on a Tesla Model Y SUV, which was videotaped.

“It continued to drive with no warnings to the driver to stay engaged. We were surprised how easy it was to defeat the insufficient safeguards.”

The magazine contrasted Tesla with cars made by General Motors, Subaru, and other automakers which use camera-based systems to track the movements of a driver’s eyes and ensure the vehicles are not unmanned.