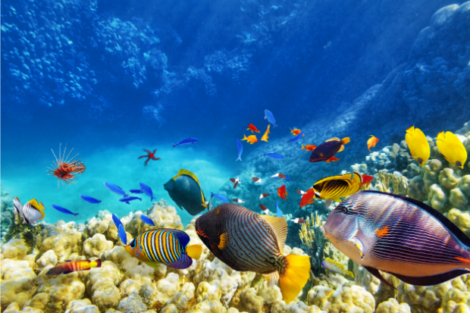 Descending into deeper colder water, some fish lose their perception of color to the point where they are no longer able to make sense of the world. A new study warns that certain species, which are being deprived of visual cues that are essential to their reproduction and safety, may now be under threat.

Rising temperatures in the world’s seas and oceans could have a major impact on the lives of certain marine species, making it impossible for them to survive, points out a new study by marine biologists Eleanor Caves, of the University of Exeter in the United Kingdom, and Sönke Johnsen, of Duke University in the United States.

Their research published in the Proceedings of the Royal Society explores the implications of fish descending into deeper cooler waters to escape the consequences of global warming. A previous study had already demonstrated that fish species off the northeastern coast of the United States descended more than one meter per year between 1968 and 2007, in response to a warming of only about 1 degree Celsius.

However, these migrations are not without danger. Indeed, as the Anglo-American study shows, moving into deeper waters can reduce aquatic species’ perception of colors, making it more difficult for them to discern differences in hue and luminosity, which provide them with essential information when choosing a mate.

Research conducted on cichlids in Lake Victoria in Africa, for example, has shown that these fish rely on color to identify members of their particular species. But when water clarity is reduced (for example by pollution), they can no longer distinguish between their own kind and other species when choosing a mate.

Beyond the question of reproduction, the loss of color cues also makes the fish more vulnerable to potential predators.

“In clear ocean water, red is the first color to fade and disappear. This is important because many species use red signals to attract mates or deter enemies,” says Sönke Johnsen, the co-author of the study.

According to the researchers, some species are more vulnerable than others, especially those that inhabit semi-enclosed waters (the Mediterranean, Gulf of Mexico, and Black Sea) or coral reefs, which cannot avoid the heat by moving towards the poles of the planet.

“These species will have no option but to dive deeper to keep their cool,” assumes Eleanor Caves.

In all probability, this phenomenon will be accelerated by rising sea surface temperatures, which could climb by as much as 4.8 degrees Celsius by the end of this century. JB