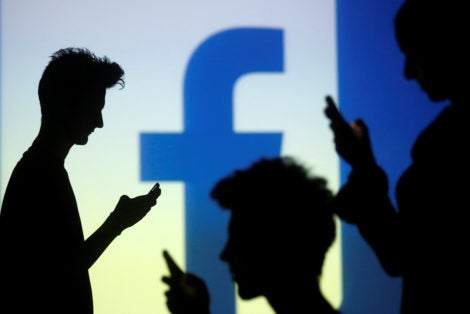 FILE PHOTO: People are silhouetted as they pose with mobile devices in front of a screen projected with a Facebook logo, in this picture illustration taken in Zenica October 29, 2014. REUTERS/Dado Ruvic

The campaigns aimed posts or comments at people in Azerbaijan, Central African Republic, Mexico, Palestine, Peru, and Ukraine, according to the leading social network.

“All of the organizations targeted primarily or exclusively audiences in their own countries,” Facebook head of security policy Nathaniel Gleicher said during a briefing.

“Ukraine is an interesting example; it is a top source of coordinated inauthentic behavior activity removed from the platform in the past few years.”

One of the campaigns was uncovered as a result of a tip from the FBI, and was linked to Ukrainians sanctioned by the US Treasury Department for a separate campaign to influence the presidential election here, according to Gleicher.

“While someone was targeting the US election, this separate campaign was running in Ukraine promoting anti-Russian content,” said Facebook global threat intelligence team leader Ben Nimmo.

The Ukraine operations promoted positions of various politicians and parties, indicating they were the work of hired ad or marketing firms, according to Nimmo.

“Think of these operations as would-be influence mercenaries, renting out support,” Nimmo said.

Ukraine has become a “hot spot” for inauthentic online campaigns, according to Gleicher.

As Facebook cracks down on fake accounts, culprits have been trying their luck at direct messaging services such as WhatsApp and Telegram, executives said.

Over the past year, there has been a steady trend of “threat actors” trying to get to people directly on messaging platforms at Facebook and beyond, according to Gleicher.

“Despite this shift, they are still getting caught,” he said.

A total of 1,656 Facebook accounts and 141 Instagram accounts were removed in April for violating rules about coordinated inauthentic behavior, according to the California-based company.