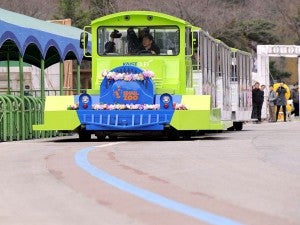 The Online Electric Vehicle (OLEV), towing three carriages, runs along a blue line under which power strips are buried for recharging, at an amusement park in Seoul. General Motors says EVs are crucial in light of the climate crisis. AFP PHOTO

MANILA, Philippines – The road to electric vehicles (EVs) will not happen overnight, but it is a necessary direction for the environment in light of the climate crisis, according to the executive of one of the world’s largest automakers.

General Motors’ Tom Cooney, vice president of global public policy, said the company is working with governments worldwide, including the Philippines and Southeast Asia, to shift toward electric-powered vehicles, seen as a cheaper, cleaner alternative to gas-guzzling cars.

“Change can be hard, transformation can be hard, but people do change,” he told foreign journalists in a briefing organized by the Foreign Press Centers of the US Department of State last week.

“This change is coming and it’s for the environment. This is necessary for climate change,” he added.

Early this year, General Motors shocked the auto industry by announcing it would only sell EVs by 2035, making a dramatic end to the gasoline and diesel-powered cars, trucks and SUVs, roaring vehicles that made GM famous around the world.

The announcement came a day after US President Joe Biden signed a series of executive orders on climate action, including a goal of installing 500,000 new electric vehicle charging stations by 2030.

Electric vehicles have been touted as one way to combat the climate crisis, especially since they reduce emissions from gas and diesel vehicles.

However, it won’t completely solve the transportation sector’s huge emissions. Electric cars would not emit any emissions directly but would still run on electricity produced by coal and fossil fuels in many parts of the world.

According to government data, vehicles are responsible for most of the country’s emissions and poor air quality, especially in urban areas.

Challenges come with the shift. The public has concerns about the high costs of electric cars and range anxiety—fear that the car will run out of power before reaching its destination—or so many countries around the world do not yet have adequate infrastructure that enables these vehicles to find mainstream acceptance, such as charging stations.

“We’re working with governments around the world… in association with other automakers to help build that environment out there and increase consumer confidence to adopt an EV,” said Cooney.

It’s all about government incentives, consumer incentives and infrastructure investments, he said.

“General Motors itself is making huge investments in EV charging infrastructure with various private sector partners, but that public-sector support is essential as well,” he added.