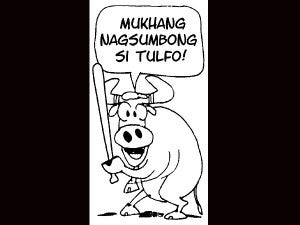 Neither side would give up without a fight. That goes for their supporters, too.

According to surveys conducted by the Inquirer news website, Inquirer.net, and its tabloid, Bandera, Inquirer  columnist and radio host Ramon Tulfo isn’t to blame for the fight with celebrity couple Raymart Santiago and his wife Claudine Barretto at the Ninoy Aquino International Airport (Naia) last May 6 and his version of the incident is more credible.

The Santiagos should be blamed for the fight with Tulfo, said 2,059 or 50.86 percent of the 4,048 respondents in an Inquirer.net poll which asked “Who do you think is at fault in the Naia brawl?”

Aside from the Santiagos, the other choices were Mon Tulfo, Cebu Pacific or Will wait for results of the investigation.

The tally according to the Inquirer.net poll as of 4 p.m. Saturday: 921 or 22.75 percent of the respondents thought Tulfo was to blame; 703 or 17.37 percent said it was Cebu Pacific, the airline that off-loaded the baggage of the Santiagos on their trip back to Manila from Boracay, and 365 or 9.02 percent preferred to wait for the results of the investigation.

The poll ran for three days and of the 184 who sent their responses, 133 believed Tulfo’s version, 37 were for the Santiagos and 14 believed neither.

Some of the comments for Tulfo:

“The Barettos have roots from Iloilo. But as an Ilongga, I denounced what Claudine did to the airline crew, humiliating and intimidating her. Ilonggas are perceived to be brave but respectful in the right place and in the right time.”—Ara Debie Toledo, 43, Lambunao, Iloilo

“Arte lang ni Claudine na may sugat siya sa hita eh kitang-kita sila kung paano nila pinagtulungan si Mr. Tulfo.  Dapat silang idemanda, walang respeto sa matanda (Claudine was just pretending to have a wound on her thigh. It was clear how they ganged up on Mr. Tulfo. They should be charged for disrespect for elders.)” —Senior citizen from Isulan, Sultan Kudarat

Panig ako kay Raymart at Claudine kasi hindi naman sana magkakarambulan kung hindi nakialam si Mon. Komo journalist ka di ka na marunong mag-respeto.  Ang talagang may kasalanan ’yung Cebu Pacific (I am on Raymart and Claudine’s side because the incident would not have taken place if Mon did not interfere. Just because he is a journalist does not mean he should have no respect. The real culprit is Cebu Pacific),” —Romy, 41, Davao City

Both right or both at fault

From those who said “neither”:

The brawl at the Terminal 3 of Naia erupted when Tulfo caught Barretto on his mobile phone berating a Cebu Pacific ground crew for failing to inform them that their baggage was off-loaded from their plane back to Manila from Boracay where she, husband Santiago, their children and some friends went for a vacation.

Tulfo said Santiago demanded that he turn over his phone, which he refused.

A YouTube video, which shows the Santiagos and their companions ganging up on Tulfo, has reached more than 700,000 hits.

But Barretto countered that it was Tulfo who kicked her first, which prompted the strong reaction from her husband.

Both camps have since filed charges and counter charges.