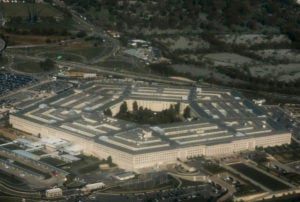 FILE PHOTO: The Pentagon says its UFO-hunting program wound down five years ago, but the New York Times reported it is still in operation. © SAUL LOEB – AFP/File

Washington, United States — There is no evidence that unexplained aerial phenomena spotted in recent years by US military personnel are aliens, an upcoming government report quoted by The New York Times Thursday said, but officials still can’t explain the mysterious aircraft.

The newspaper, which cited senior administration officials briefed on the findings of the highly anticipated report, said they were able to confirm the unusual vessels were not the product of secret Pentagon technology.

But the review of more than 120 incidents over the past two decades was unable to explain the mysterious movements of the craft, which include unusual acceleration, direction changes, and the ability to rapidly submerge.

And while senior officials told the Times the lack of clear findings means that while there’s no evidence of alien technology behind the phenomena, it’s also impossible to rule out.

One senior official briefed on the report said intelligence and military officials increasingly worry the phenomena could be China or Russia experimenting with hypersonic technology.

The upcoming report — expected to be released to Congress by June 25 — will have a classified annex, officials told the Times, which will likely fuel speculation that aliens are actually behind the encounters.

And the mystery was further drummed up by former officials with access to classified intelligence.

“What is true — and I’m actually being serious here — is that there’s footage and records of objects in the skies that we don’t know exactly what they are,” former President Barack Obama told “The Late Late Show” last month.

The US military no longer describes them as unidentified flying objects, or UFOs, instead using the term “unidentified aerial phenomena.”

Your subscription could not be saved. Please try again.
Your subscription has been successful.
TOPICS: alien, Military, Pentagon, Space, UFO, unidentified aerial phenomena, US
Read Next
TECNO Mobile presents a show match like no other at the Power Your Game livestream event
EDITORS' PICK
Viral phone HONOR X9a 5G launched at P16,990
House energy committee chair Arroyo bats for cheap electricity
ICC resumes probe on PH’s drugs war
Inexplicable price hikes, supply confusion: After onion, garlic may be next
Marcos told: Comply with ICC probe to give justice to victims of Duterte’s drug war
Things you can do with vivo Y02s’ upgraded 3GB+64GB storage
MOST READ
LOOK: Heart Evangelista joined by husband Chiz Escudero in Paris
Panlasang Pinoy vlogger airs frustration after family’s belongings stolen in flight to PH
Bea Alonzo reveals she will ‘never’ be friends with Gerald Anderson
Haiti police block streets, break into airport to protest officer killings
Don't miss out on the latest news and information.