Paris gets a taste of pizza-making robots 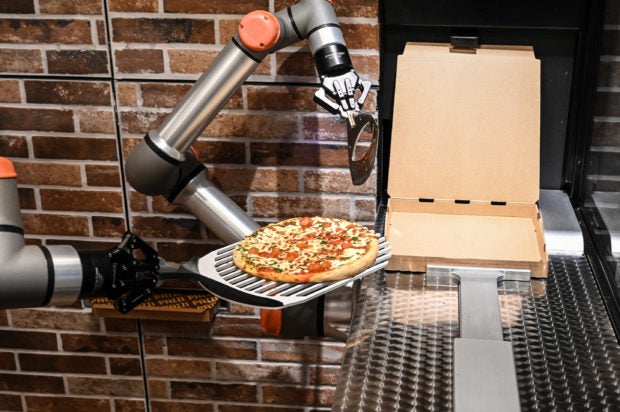 The pizza-making robot from Parisian startup Pazzi that will begin to operate in the heart of Paris. Image: AFP/Bertrand Guay

Behind the dark green facade of a new Paris pizzeria, arms wielding ladles and spatulas perform an intricate ballet to churn out made-to-order pies, but no human hands are involved in the performance.

The glass-enclosed kitchen is staffed by silver robots that build, bake and box up pizzas with the help of specially developed equipment, at a rate of up to 80 an hour.

After ordering at self-service terminals, clients can watch as the machines flatten fresh dough, spread tomato sauce, add organic vegetables, cheese and other toppings, then whisk the creations into the oven.

“It’s a very fast process, the timing is perfectly controlled and quality is assured because the robots are consistent,” says Sebastien Roverso, 34, a co-founder and inventor of the Pazzi robot and its namesake restaurant.

“And it’s a pretty cool and relaxed atmosphere,” he says. “The idea is that you spend a few pleasant minutes watching the robot while waiting.”

Or as the sign says in English out front: “Come for the show, Stay for the Pizza!”

Roverso and a fellow engineer and inventor, Cyrill Hamon, launched their adventure eight years ago in a family garage, securing millions of euros from venture funds including the state-owned development bank, Bpifrance.

After a first restaurant in a Paris suburb in 2019, the company has its sights on an international chain where employees would focus solely on customer service or table cleanup.

“We’re finalizing contracts for new spots” in Paris, “and in March or April we’ll open in Switzerland,” said Philippe Goldman, a former L’Oreal executive who came on as managing director for the start-up.

The Pazzi robots are almost completely autonomous and in theory won’t be susceptible to breakdowns.

“And we have engineers who work remotely and can take control and watch with cameras, so they can correct things if necessary to make sure service continues,” Roverso said.

The tricky part was dealing with fresh dough, since using frozen products was out of the question.

“The dough is alive… every hour that passes, it’s different,” said Thierry Graffagnino, a chef and three-time winner of World Pizza Contest in Rome, who was brought in to help elaborate Pazzi’s recipes and process.

“We had to make sure the robot could figure things out alone and adapt, something that even some pizzaiolos don’t always know how to do,” Graffagnino said.

“Today we make a very good pizza, but we’re still looking to improve it, we’re not going to stop here,” he said.

The robots are also seen as an answer to chronic labour shortages in restaurants and food service. In many countries, owners are struggling to rehire workers furloughed in COVID-19 lockdowns, since many are abandoning the sector’s long and stressful hours.

“Fast food is facing a crisis everywhere in terms of hiring and the ability to find employees,” Goldman said.

But even if robots start supplementing cooks in the kitchen, Pazzi has no intention of trying to replace traditional pizza cooks entirely.

“You have Neapolitan pizza, Sicilian pizza, Roman pizza, and now there’s Pazzi pizza. It’s made by a robot but after all, it’s healthy competition,” Graffagnino said. “It’s up to everyone to make a good pizza.” JB