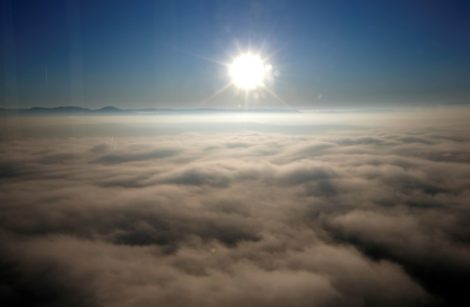 Geoengineering science is advancing, but the question remains – should we use it?

The U.N. climate report released Monday presents a major leap forward in predicting how geoengineering to limit global warming might affect the planet, although scientists said the greatest hurdle remains, deciding whether to use the controversial methods.

Geoengineering involves large-scale interventions that shift the climate, generally with an aim of cooling the earth.

But the report makes no recommendations on whether to use either method. The panel could give guidance on how decisions on geoengineering should be made in another report due in 2022.

Solar radiation management techniques generally control how much sunlight is reflected back out into space, preventing it from heating the earth.

Climate models previously focused on how solar radiation management would change the planet’s overall average temperature. But the models run on supercomputers have rapidly become much more sophisticated in predicting variations from the earth’s poles to the equator and between hemispheres, said Govindasamy Bala, a lead author of the report from the Indian Institute of Science.

They can also better project how geoengineering could alter the amount of rain and snowfall, he said.

This would allow for more advanced uses of multiple forms of solar radiation management at the same time to control for both temperature and precipitation.

For example, humans could spray sulfate aerosols – tiny reflective particles – into the stratosphere 20 to 25 kilometers (12 to 16 miles) above the earth’s surface to reflect more sunlight back into space, which lowers global temperatures.

But sulfate aerosols have the side effect of also lowering average precipitation. A separate method to thin out cirrus clouds in the upper atmosphere could offset the effect and increase precipitation, Bala said.

“The science is there,” Bala said.

“I think the next big question is, do you want to do it? … That involves uncertainty, moral issues, ethical issues, and governance,” he said.

That’s because every region would be affected differently. While some regions could gain in an artificially cooler world, others could suffer by, for example, no longer having conditions to grow crops.

He said his personal assessment is that a world that overshoots the Paris Agreement targets of limiting warming to 1.5 to 2 degrees Celsius would be better off using geoengineering. But he is pessimistic the world’s governments could come to an agreement on it.

Paulo Artaxo, another lead author and an environmental physicist at the University of Sao Paulo, said he interprets the report as still emphasizing caution when it comes to geoengineering.

“Basically the message is more or less the same as (the previous report): The science is not mature enough,” Artaxo said.

“The side effects of any of the known geoengineering techniques can be very significant… Society has to consider if these side effects are too big to try any strategy.”

While solar radiation management remains on the periphery of climate discussions, carbon dioxide removal has been accepted as a necessary tool for mitigating climate change, said Chris Field, an earth scientist at Stanford University.

“That’s become more clear with the recognition we’re going to need negative emissions…and almost by definition negative emissions have to be through some kind of carbon dioxide removal,” said Field, who was not involved in this IPCC report.

This U.N. report expressed much higher confidence regarding the use of carbon dioxide removal to help limit rising levels of the greenhouse gas in the atmosphere, said Leticia Cotrim da Cunha, a lead author and oceanographer at Rio de Janeiro State University.

There are a wide variety of methods of greenhouse gas removal including technological solutions like using massive machines to filter carbon dioxide out of the air, or capturing carbon emissions from factories or fossil fuel drilling and injecting it into certain underground rocks to contain it.

Carbon dioxide can also be removed from the atmosphere by using forests or by encouraging plant growth in the ocean.

The report focuses on greenhouse gas removal as a whole without making recommendations on the merits of individual methods, Cunha said.

Greenhouse gas removal cannot solve climate change by itself and must go together with cutting back how much carbon dioxide is being emitted in the first place, she said.

“We can’t go on emitting this much CO2 and just try to remove all the excess CO2 from the atmosphere,” Cunha said.

“We would need an extra planet to put all the CO2.”