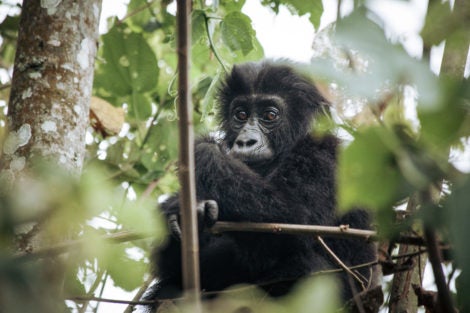 A baby Grauer’s gorilla, a critically endangered species, plays in the forest of Kahuzi-Biega National Park in the northeastern Democratic Republic of Congo, on September 30, 2019. – Since summer 2018, some local communities have started logging in this protected area, threatening gorilla habitat. (Photo by ALEXIS HUGUET / AFP)

Bukavu, DR Congo — DR Congo’s Kahuzi-Biega National Park is celebrating the birth of an eastern lowland gorilla, one of the world’s most endangered species.

“We have the pleasure of announcing the birth of a baby to the female Mwinja,” the park announced on Facebook on Friday.

“Our rangers were there and captured this moment of intimacy, on Saturday, August 7. She seemed happy to be showing off her baby. Both are in very good health.”

The birth is “a sign of hope,” the park’s spokesman, Hubert Mulongoy, told AFP.

The park, located in a deeply troubled part of eastern Democratic Republic of Congo, said the birth brought its tally of the apes — Gorilla beringei graueri — from 171 to 172.

Mwinja has already had offspring but this is the first she has had with a well-known male called Nabirembo.

The park’s gorilla population includes two tribes who live in so-called habituation, meaning that they are used to human presence nearby.

Kahuzi-Biega covers around 6,000 square kilometers (2,300 square miles) of mountains and rainforests near the western banks of Lake Kivu and the Rwandan border.

It is a magnet for intrepid eco-tourists, who are drawn to its unique landscape and rare species.

The park is listed by UNESCO as a World Heritage site in danger because of the presence of armed groups and settlers, poaching, and deforestation.