Cities: Skylines is a management sim and city building game, and it was developed by Colossal Order and published by Paradox Interactive. This city-building game features a wide area for players to build in and offers support for custom content. 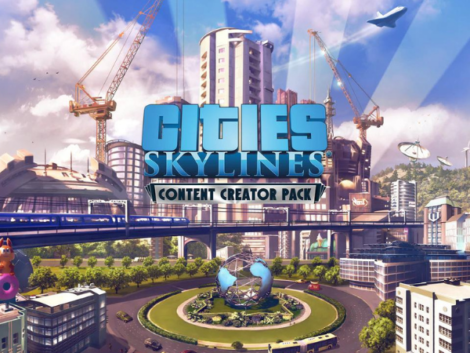 Keep reading to get the full scope of our Cities: Skylines review.

Setting up the City – Roads

Those pesky highways always getting in our way. But Twitter user @GodofFukurahagi has found an elegant solution with no mods, and on #PS4 ! #CitiesSkylines pic.twitter.com/g2IfN2o9yA

This city-building game, while fun, has a major challenge that involves traffic and roads. This is rather unsurprising as it was created by Colossal Order and Paradox Interactive. This is the same developer/publisher duo that launched the Cities in Motion series, a transportation management game with road problems.

It has to be stated here that Cities: Skylines is not related to the Cities XL series despite their shared road difficulty.

In addition to the traffic congestion problems, you also have to worry about navigating traffic routes. From our Cities: Skylines review, there were many recurring issues in the game, such as delayed garbage and dead body removal, as well as ignored building fires.

These issues occurred because they all needed different vehicles to reach certain locations fast, which is typically a function of clear traffic and easy access.

Learning how best to construct roads and build intersections requires trial & error, consistency, time, and attention. This is something most players will find very fulfilling. On the other hand, if you rather build long, ranging roads and uninterrupted tree-lined avenues than practical grids, go ahead but be ready to lose a lot of functional movement within your city.

When you finish building your roads and have apportioned them as industrial, commercial, and industrial, basic structures will start popping up. You can add institutional services such as schools, police stations, plazas, and parks to enable the structures to level up. If you want to split your city into districts, you can do so with the help of a brush tool.

Districts are very useful for altering regulations and policies such as drug use legalization, recycling, and free public transportation without needing to release them citywide. You can even impose different taxes on different districts and ban industrial traffic in congested areas. Remember to make an alternate route for heavy trucks to pass through. In addition, you can set up industrial districts to concentrate on logging, farming, and oil drilling, and so on.

As well as organizing the physical elements of your city, you will need to manage your bank account and augment it with loans. You will have to budget for different services and utilities and regulate taxes for businesses and residents.

This management seems a bit overwhelming. However, it is just playing around with sliders and achieving a balance between maintaining positive revenue and aggravating residents with heavy taxes.

Other than the capacity to focus on particular industries or opt for office towers instead of factories, there isn’t a lot of deep specialization in this game. Generally, Skyline’s simulation isn’t particularly deep, so players searching for an intricate city simulation may be let down.

As well as businesses and homes, there are impressive buildings such as opera houses and stadiums that pop up the more your city develops. There are also monuments like a big hadron collider and a space elevator that boost tourism, amongst other advantages.

Transportation options such as ships, trains, and airports for industrial and passenger uses begin showing up as your city grows. The initial building space (which was just a square plot of land) you had expanded as well. 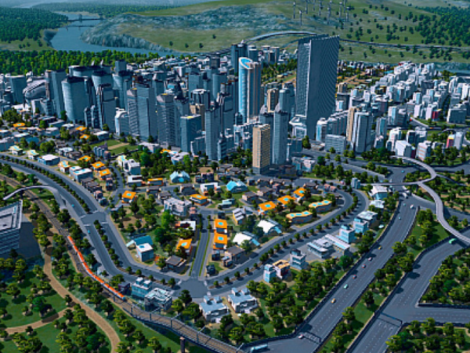 Skylines’ UI runs quite smoothly and is simple to grasp. You can take a look at your city via multiple filters such as property values, electricity and water availability, pollution, crime, and use of public transportation.

When there are problems like sewage issues in homes or businesses with scarce customers, icons appear on top of the affected buildings. Citizens and residents can communicate with you through a twitter-reminiscent feed called “Chirper,” located at the top of your screen. These communications can get monotonous quite fast, but fortunately, an option in the menu stops these messages from showing up automatically.

Sometimes the city building experience while playing Cities: Skylines is exceedingly satisfactory. An instance of this is when buildings in a particular district start leveling up because you have set up the proper amenities and services. Another satisfactory experience is resolving difficult traffic congestion.

The gaming experience frequently feels calming. For instance, when you’re gazing down at the small NPCs residing within the city you created or when you’re flying the camera around the city.

On the other hand, things can feel very stressful when you find out about your industrial area. Especially when it is contaminated the waters of a residential zone. Or when a power grid becomes overloaded, and there’s no money for a replacement plant. The Skylines residents can tolerate quite a lot. However, if you keep them in terrible conditions for too long, they will leave the city in multitudes.

There were several downsides while playing the game. For one, doing the plumbing work gets boring after a while. Also, sometimes, when resident and business satisfaction is very high, there’s little to no demand for new structures for extended periods.

Then, seemingly out of nowhere, demand for buildings increases again. Even in thriving living and business districts, whole buildings are occasionally abandoned for no reason.

Finally, the Driver AI is fairly unreliable as cars will often fill up in one lane. This is even though others are free for use, which can cause traffic snags.

Nonetheless, these issues may not ruin your enjoyment of the game. You eventually learn how to navigate these situations as you continue to build cities. 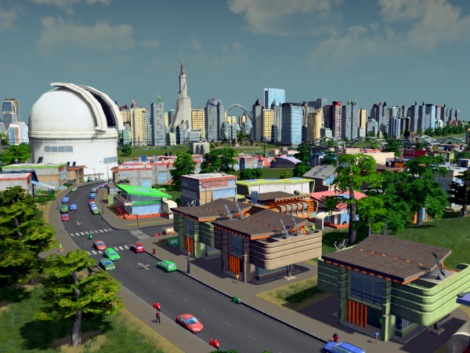 If you are a player that finds it effortlessly easy to build up a city from basic to mega and fully fleshed, our Cities: Skylines review found that the game has a “hard mode” to ramp up the challenge. On the other hand, if you’re looking for free and unbridled construction, several modes offer an ‘unlimited’ bank account. Also, fully unlocked buildings at the beginning of the game.

After our Cities: Skylines review, here’s our verdict – a couple of flaws. However, the game is a fun city builder that suits casual and dedicated players. It has just the right multi-tiered and challenging features to provide an enjoyable city-building experience.