Far Cry 6 Review – All you need to know

Far Cry 6 is the newest entry into the action-adventure series. This first-person shooter game was developed by Ubisoft Toronto and published by Ubisoft. It was launched on October 7, 2021, for Xbox Series X/S Xbox One, PlayStation 4, PlayStation 5, and Microsoft Windows.

Keep reading our Far Cry 6 review to find out what the series got right and wrong in this new installment, and if it’s worth playing.

Players are trapped in the island nation of Yara ruled over by an enigmatic maniac. Though fictional, the overall design and concept of Yara are heavily influenced by Cuba. This island is controlled by a fascistic dictator called Anton Castillo, played by the famous TV actor Giancarlo Esposito.

Your job is to unite the diaspora revolutionaries to help depose Castillo and his understudies. The dictator’s lieutenants and understudies range from “psychotic propaganda director” to “psychotic navy Admiral” to “psychotic air force Captain ”. Every single game scene Esposito plays in is immensely thrilling, especially the ones with his son, Diego.

In general, the story is comparatively predictable, with all the abrupt-yet-expected betrayals and heart-breaking character deaths typical of a big-budget action film. From our Far Cry 6 review, the game finds a way to balance the ridiculousness of its gunplay with its somber main story.

However, there are definitely some impressive character moments in this game. Far Cry made a good decision to bring back third-person cutscenes, especially if you select the femme version of Dani Rojas –played by actress Nisa Gunduz– who’s one of the main characters. There are also fascinating characters like Glow’s Shakira Barrera and newcomer Xavier Lopez.

This sixth entry does try to be more socially aware than previous far cry games and does a surprisingly good job at presenting several social issues. Although the game story and scripting may miss the mark sometimes with these social matters, it is still laudable.

On the other hand, the game still struggles with showing a genuine representation of Latin American culture and an exaggerated version tailored to gratify mainstream Western players. The Far Cry world does seem like a stunning interpretation of Central and South American life. Still, the story occasionally leans heavily on certain colloquialisms that it comes across as a bit ‘caricaturish.’ 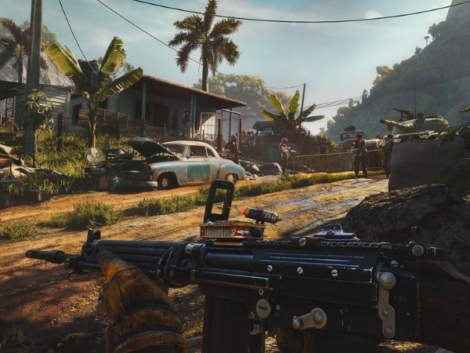 Previous Far Cry games mostly set players up against mercenaries, cultists, mutants, cyber commandos, evil cavemen, and pirates. However, in Far Cry 6, the “bad guys” are efficiently organized into a well-fortified army. Considering the series’ origins, this may be a bit stuffy, but it offers players the opportunity to have more varied and riveting fighting experiences.

Following the lead of Far Cry: New Dawn, Far Cry 6 brings more than the standard consignment of real-life weapons such as sniper rifles. This new entry comes with several customization choices and equipment like Unique Weapons, Legendary Weapons, and more. It also provides an array of “Resolver Weapons” and Rides, named after the Cuban custom of “making do with what you have.” This particular practice stemmed from the US embargos that happened in the ’60s.

These decrepit killamajigs include a minigun made from an old motorcycle engine that can be boosted to fire explosive rounds and a handy EMP cannon, which works great for incapacitating helicopters and tanks. The game also has several juries–rigged vehicles you can use once you find where they are located.

While these multifunctional vehicles don’t have the armor plating and firepower of your standard customized vehicles, they are perfect for moving around the huge open world of Yara.

To cap off your array of weaponry, you have Supremos. These are essentially Ultimate Abilities strapped to a backpack. Also, it’s alongside a clump of depleted uranium. Each Supremos is unique in its capacity. They could be a round of poison bombs that trigger hallucinations. Then, make soldiers turn on themselves or a rocket salvo to eliminate enemy strongholds.

However, you should know that it takes a couple of hours to gather enough weapons. These weapons will take you through a considerable number of game-plays. 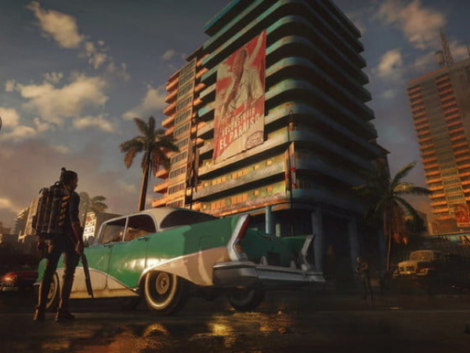 In Far Cry 6, capabilities and skills that were previously revealed in RPG-esque are now appended to mods. Also, like armor for your gear as well as weapons. It is especially gratifying to make use of the huge array of equipment. This is good to build playstyle loadouts for every Supremo in your arsenal. In addition, the amount of unlockable gear offers a wide variety. This is ranging from C4 to proximity mines to perception grenades with tag enemies automatically for you.

Switching bonuses and perks over to clothing and mods truly shows Far Cry 6’s focus on personalization and crafting. Although, some armor bonuses should probably stay permanently unlockable. It is logical to add things like enhanced fire resistance to a Nomex jacket or soundless movement to soft-soled shoes. However, why should players have to wear a particular hat to carry out a stealth takedown? This is one of the areas our Far Cry 6 Review shows that the game falls short.

If you don’t want to spend time instigating and tackling random chaotic encounters, there are lots of side missions, treasure hunts, and other activities you can play to immerse yourself in the Far Cry 6 world.

Platforming issues and other bugs

after downloading the Far Cry 6 v1.05 patch today (PS5), im now getting a game-breaking bug with my weapon wheel that prevents me from selecting anything. game is now unplayable. reloading doesnt fix. anyone else? please help/fix this! @Ubisoft @UbisoftSupport #PS5Share #FarCry6 pic.twitter.com/7nr0dZAw7g

When it comes to platforming, the Far Cry series typically does a less than average –to the average job. Yet, in this sixth installment, the mechanics, especially climbing and jumping, are more fussy than usual. This may be relatively a non-issue for some players, but it could throw them off their game for others.

For instance, some games have clear indications like “you can only climb purple ledges,” but in Far Cry 6, these indicators are significantly less consistent. Some objects to climb are distinctly in blue; others are in orange. You can only climb on these vines. However, the ledges that have vines on them can also be on as well. Be careful while climbing, though, because some aren’t high enough while others are too high.

Other than many crashes and freezes messing up the load screens, the bugs encountered in this Far Cry 6 review were minor. They included the odd need here and there to reload checkpoints. Also, slow down framerates in the middle of cutscenes, or ride through thick foliage and several dropped or unbalanced audio tracks.

Does Far Cry 6 Have Co-op Capabilities?

Far cry 6 has co-op multiplayer capability that is available online only. It doesn’t have a “same system” co-op. The game can only be ‘multiplayer between players in the same family of systems.

Far Cry 6 is shaping up to be arguably the best installment in the series. The cast serves up great performances, and the story is very enjoyable despite its predictability. And although there are several weird design choices and shaky new mechanics, the innovative weaponry still does what it has to do when it has to do it.

If you haven’t played Far Cry 6 yet and you’re looking for an action game with great characters and lots of gunplay, add this game to your list.