Who needs staff, when there are robots and tech-savvy customers? | Inquirer Technology
Close
menu
search

Who needs staff, when there are robots and tech-savvy customers? 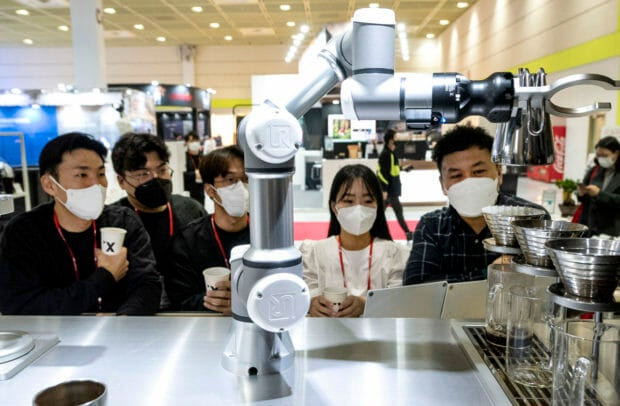 “From smart coffee roasters to drip coffee-making robots, there were various opportunities to get a taste of the ‘smart cafe’ experience,” one official at the event said.

These are the latest sign of automation and a demographic shift in South Korea where cashier-free stores have increasingly been popping up on the streets. Over the last few years, retailers small and large have been adopting self-checkout systems, also known as kiosks, or even going completely staff-free to save labor costs and keep stores open late into the night.

READ: South Korean businesses growingly adopt unmanned services
Nearly 1,700 “hybrid” stores, which rotate between having staff in the store and going unmanned, are currently in operation between the four major local convenience store chains — CU, GS25, 7-Eleven and E-Mart 24. With over 47,000 convenience stores in the country, the figure might not be so staggering for now. But the number of hybrid stores has been rapidly rising in recent months, according to E-Mart 24.
FEATURED STORIES
TECHNOLOGY
Keep ransomware at bay with these security and backup strategies
TECHNOLOGY
Why MP3 Juice is the Best Free MP3 Downloader Site
TECHNOLOGY
Google AR ‘Measure’ app turns Android phones into virtual measuring tapes

“After we announced the decision to expand hybrid stores in July, we have been rolling out the system. Nearly 80 percent of our stores are not open 24 hours a day,” one representative at E-Mart 24 said.

Boasting over 5,700 locations in total, the convenience store chain, operated by Shinsegae Group, saw the number of hybrid stores jump from some 150 earlier this year to around 700 as of late October.

Meal kit or banchan stores — shops dedicated to selling ready-made meals and side dishes — have also been getting the automation treatment.

“Our main target is married women in their 30s and 40s who are also working and part of dual-income couples,” a representative at Omealdang, an unmanned meal kit store chain, said.

With no need to hire shopkeepers, these stores are open 24 hours a day all year round.

“The ready-made meals are produced in factories and supplied (to stores) directly and be put on display and sold without having to be cooked in the store, which has been well-received by meal kit shop owners,” the representative added.

It was early 2018 when Amazon first unveiled its cashier-less Amazon Go to the public. Since then, South Korean businesses have also quickly adopted a similar concept in businesses ranging from ice creams stores to unmanned cafes and coin laundry services.

According to Shinhan Card, a leading card issuer in the country, credit card transaction volume at staff-free cafes saw a 50 percent year-on-year jump between August 2019 and January 2020, leaving behind franchise coffeehouses and budget cafes which saw a 5 percent and 24 percent jump over the same period, respectively.

Lee Young-ae, a professor at the Department of Consumer Science at Incheon National University, said “price competitiveness,” “curiosity about something new” as well as “being able to shop quickly” have made unmanned stores appealing to consumers.

But for staff-free stores to last long-term, they will have to tackle issues such as security, the professor said.

“It could look like a lot of people are using these services because they did not exist before. But in the long run, customers could feel tired or confused if they are not given the information or services they need (at unmanned stores).”

How will the automation boom affect the job market?

“We have already experienced the contactless age. And as (business owners) face issues such as labor costs and manpower management, staff-free stores present an alternative. I expect the demand for similar business models to continue to rise,” Professor Lee said.

A study from the Korea Economic Research Institute last year argued that many low-paying jobs were erased when the country’s minimum wage was increased by 16.4 percent in 2018 while those who were employed enjoyed higher pay.

In a survey conducted by the Korea Federation of Micro Enterprise earlier this year, some 87 percent of small business owners said they would have difficulties paying the minimum wage if it were increased for next year.

In an effort to help small business owners, the government announced the “smart supermarket” plan earlier this year — equipping hundreds of supermarkets with entry verification systems and self-checkout kiosks as well as security devices.

“This is a trend which cannot be stopped by the government. It could also create jobs in new fields such as solutions companies focusing on unmanned stores including kiosks and other automation systems. Low-skilled jobs are likely to disappear as a result.

“Rather than focusing on this specific trend, the government needs to come up with a comprehensive plan to address the issue of jobs (like cashiers) disappearing,” the professor said.