Minesweeper Online – How to Play and What to Know

If you’re looking for a blast from the past, why not try playing Minesweeper online? If you grew up in the 90s, you might remember playing this classic on your first home personal computer. Nowadays, you can get those nostalgia tingles right away thanks to many websites that let you play by yourself or compete with others on the internet.

If you were born in the 2000s, this puzzle game might not ring a bell. Search for it online, and you might scratch your head as to how people found such a simple game fun. Playing classic Minesweeper serves a trip down memory lane, and I’ll show you how to play! If you look closer at it, you’ll uncover a few details about the humble beginnings of video games.

We’ll talk about when Minesweeper became popular and how the game works. Then, I’ll show you how to increase your chances of winning a session. You might want to open Minesweeper online on another tab to test the tips while reading. I understand that you might get bored, though, so I’ll explain what you could get out of playing such an old game. 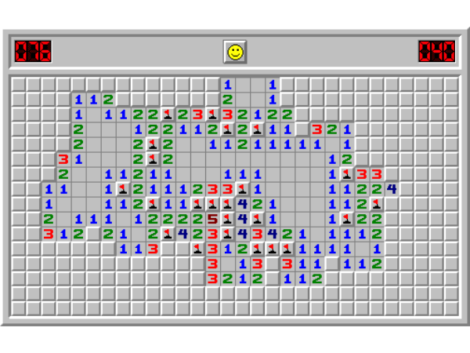 Rewind 30 years into the past, and you’ll notice that one of the most famous games of the time looks nothing like these modern titles. That’s right. Minesweeper used to be that popular!

It was made by Curt Johnson and Robert Donner and came out in 1990. It was included in the Windows Entertainment Pack and became a built-in feature in Windows 3.1.

Later, it showed up on the later versions of the Windows operating system. If you grew up in the 90s, your first time playing it might have been on Windows 95.

Start the game, and it will show a plain grid made up of grey tiles. The counter at the upper left shows how many bombs are left on the board. You’ll see a timer on the upper right side.

Between these numbers is a button with a yellow smiley face. Each time you click on a tile, its mouth will move as if it’s counting. Hit a bomb, and it will frown with a pair of Xs for eyes.

That’s the gist of how the interface works. Now, let’s talk about how to play the game.

The rules are the same even if you play Minesweeper online:

I beat a minesweeper game with 200 mines, I am a god pic.twitter.com/346poKCkmw

This game is more than ten years old, so there are already tips on beating it. Read the following list to learn more about them:

Note that these are the rules for the classic version. That’s what you’ll get when you play Minesweeper online. The interface may look different, but it will likely follow these rules.

This game requires both skill and luck. The numbers only give you clues as to where the bombs are, so there is still the probability that you’ll hit one no matter how careful you are.

You can find many websites that will let you play a quick round. However, you should be careful in clicking them as you never know which one may have a virus!

The safer way to play is downloading them on the Windows Store or the Mac App Store. Alternatively, you may get it for your Android or iOS smartphone.

Should you play Minesweeper?

If you grew up with this game, you might get some fun out of this. Otherwise, you might be wondering why you would ever try such a simple game.

I understand If you don’t see the appeal of playing Minesweeper online. After all, this pales compared to the cutting-edge graphics of modern games.

There are no exploits such as microtransactions or cheat codes. You don’t level up and gain new ways to beat it. You just have to win with sheer luck and skill.

What’s more, playing Minesweeper online can show you how life was like decades ago. That was the time when computers were mostly found in offices.

They didn’t give you access to the vast amount of content that the internet now has. Connecting to it was clunky because dial-up modems took minutes to provide access.

If you had a computer at home, your only games were probably Solitaire and Minesweeper. When you’re super bored, you might have doodled with Microsoft Paint.

Compare this to today when we casually load up videos and live streams anywhere. Your Nintendo Switch could run games with cutting-edge graphics despite being a mobile device!

Playing Minesweeper online may serve as a history lesson and show just how advanced technology has. Even better, it could be a surprisingly fun way to pass the time.

AirPods vs. Beats – Which to Buy

Nowadays, you can play Minesweeper online using various websites and apps. If you were struggling to get your hands on a Playstation 5, this might be a nice distraction for a while.

Gamers may receive good things if they wait until next year. The Steam Deck will be released in February 2022, so we might get our hands on a new gaming experience soon!

Better yet, why not try playing a few NFT games? Many of them let you earn cryptocurrencies while playing. However, check them carefully before playing.