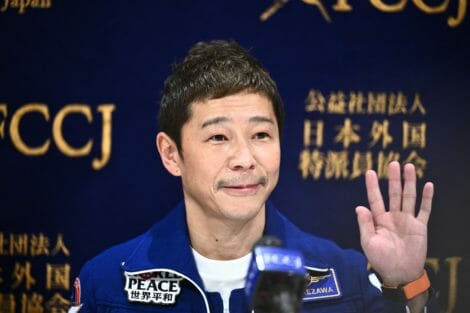 TOKYO — Japanese billionaire Yusaku Maezawa said Friday that his trip into space had given him a new appreciation for Earth, and he now hopes to plunge into the ocean’s forbidding Mariana Trench.

Maezawa and his assistant Yozo Hirano spent 12 days on the International Space Station or ISS last month, where they documented life in space for one million YouTube subscribers.

Speaking Friday for the first time since his return to Japan, Maezawa said the voyage had made him appreciate home even more.

“Going to space makes you even more fascinated about the Earth. You learn to appreciate how you feel the wind, smell things and experience the seasons,” he told a press conference in Tokyo.

“I thought: the Earth is amazing.”

While in space, he produced a string of videos including demonstrations on how to urinate, shampoo hair, and brush teeth in space.

On Friday, he explained some of the difficulties of life in zero gravity, including sleeping.

“It’s not so easy to fall asleep, because you’re constantly floating while asleep – there is nothing to anchor your body.”

The art collector also revealed he had taken a small piece by a Japanese artist with him to the ISS and had left it behind for others to enjoy.

The ISS trip was only the first of the 46-year-old’s planned space forays.

He is already scheduled to take eight people on a 2023 mission around the moon, operated by Elon Musk’s SpaceX.

But he said he has another exploration in mind now as well.

“Not only to go to the Moon, not just to travel upwards but also downwards is another dream of mine,” he said.

“I am thinking about going down to the Mariana Trench, deep under the ocean,” he said.

The Mariana Trench is the deepest place on Earth and has rarely been visited by humans.

“I want to keep taking on challenges,” Maezawa added.

He said some elements of the planned trip, including the submarine he will use and how long the expedition will take, have already been decided but declined to reveal details.

Maezawa’s space odyssey, which is believed to have cost around 10 billion yen ($86 million), has attracted some controversy, with detractors calling it a “hedonistic hobby” by the mega-rich founder of Japan’s largest online fashion mall.

Others though have credited his relatable approach and social media-savvy with renewing public interest in space flights.

Maezawa has brushed aside the criticism.

“When you take on challenges, of course, you will sometimes be criticized and sometimes fail. There may be some people who get scared and quit,” he said.

“As for me, I am not always successful. I don’t make all my dreams come true. But I still believe it’s fun to take on challenges.”