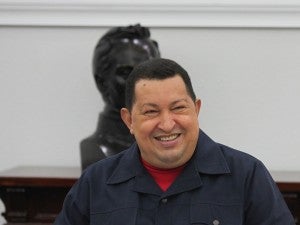 CARACAS—Firebrand Venezuelan President Hugo Chavez now has more than three million followers on Twitter, making him the most popular Latin American politician on the site — a milestone he celebrated on Monday.

Early in the day, state television VTV aired an ad announcing the milestone.

Chavez, who is battling cancer, opened the account in April 2010 to counter the opposition’s use of social media. He quickly attracted hundreds of thousands of followers, some of whom asked him for jobs or housing.

The flood of messages prompted the leftist leader to open a special service tasked with reading and answering all of the tweets.

Chavez, 57, has been in power in 1999. He is running for reelection as a “revolutionary socialist” in October against Henrique Capriles, the youthful Miranda state governor and center-left candidate for the united opposition.

Chavez has been especially active on Twitter since his first cancer surgery in Cuba to remove a tumor from his pelvic area in June 2011.

He underwent a second operation on the same area in February after it recurred, and since then has made several trips to Cuba — Venezuela’s closest ally — for radiation treatment.

Chavez is the most prominent face of the left in Latin America and has rallied a group of like-minded leaders as a counterweight to the United States.

He said last week that he would officially throw his hat into the ring for the October 7 presidential election.