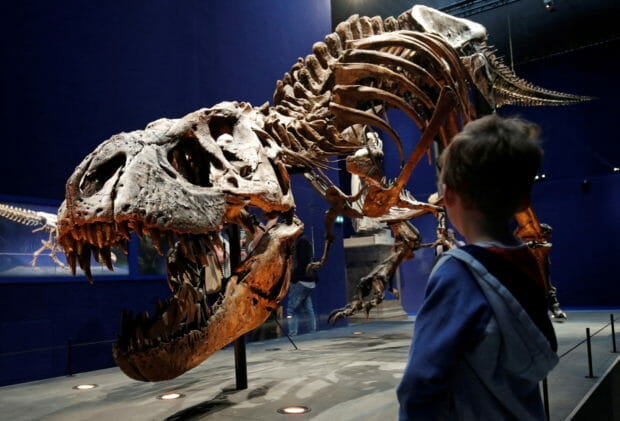 FILE PHOTO: A child looks at a 67 million year old skeleton of a Tyrannosaurus, named Trix, during the first day of the exhibition “A T-Rex in Paris” at the French National Museum of Natural History in Paris, France, June 6, 2018. REUTERS/Philippe Wojazer

WASHINGTON — A group of researchers is proposing that Tyrannosaurus, the most famous of all dinosaurs and the ultimate apex predator, actually includes three species and not just the single T. rex, based on thighbone and tooth variations among dozens of its fossils.

T. rex, meaning “tyrant lizard king,” has been the sole species of the genus Tyrannosaurus recognized since the dinosaur was first described in 1905. A genus is a broader grouping of related organisms than a species.

“After over a century of all specimens being placed into one species without the issue being carefully examined, the first and only analysis finds that the variation in Tyrannosaurus is beyond the norms for dinosaurs, and is distributed over time in a manner that indicates that Darwinian speciation from one (species) to two new species had occurred before the final dinosaur extinction cut off further evolution,” Paul said.

Tyrannosaurus prowled western North America during the during the Cretaceous Period at the twilight of the dinosaur age before an asteroid struck Mexico’s Yucatan peninsula 66 million years ago, dooming the dinosaurs.

“It is a concern that this will be controversial because of the charismatic status of T. rex, but on the other hand the study would not be getting so much attention otherwise,” said Paul, whose study was published in the journal Evolutionary Biology.

Paul was correct about controversy. Some paleontologists not part of the study disagreed with its conclusions.

“Ultimately, to me, this variation is very minor and not indicative of meaningful biological separation of distinct species that can be defined based on clear, explicit, consistent differences,” University of Edinburgh paleontologist Steve Brusatte said.

“It’s hard to define a species, even for animals today, and these fossils have no genetic evidence that can test whether there were truly separate populations. Until I see much stronger evidence, these are all still T. rex to me, and that’s what I’ll be calling them,” Brusatte added.

Paul did not rule out that differences among individuals or differences between Tyrannosaurus males and females were at play, but called this unlikely.

Tyrannosaurus had a massive head and tremendous bite strength, walked on two strong legs, and had puny arms with just two fingers. Perhaps the largest-known Tyrannosaurus is a specimen named Sue at the Field Museum in Chicago, at 40-1/2 feet (12.3-meters) long and an estimated 9 tons. The new study concluded that Sue is not a T. rex but rather a T. imperator.

Paleontologist Thomas Carr of Carthage College in Wisconsin, whose 2020 study of variation in T. rex found no evidence of multiple species, also differed with the new study.

“Perhaps most damning is the fact that the authors were unable to refer several excellent skulls to any of the three species,” Carr said. “If their species are valid, then more than just two features should identify them: nearly every detail – especially in the head – should be different.”

Doom for the dinos came in springtime