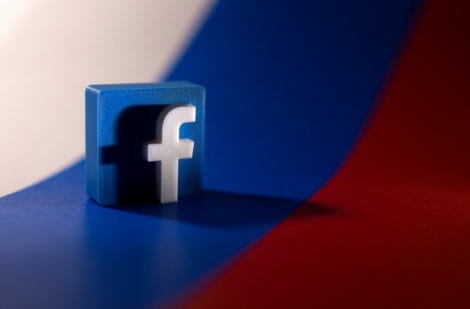 Russia is blocking Meta Platforms Inc’s Facebook, the country’s communications regulator said on Friday, in response to what it said were restrictions on access to Russian media on the platform.

The regulator, Roskomnadzor, said there had been 26 cases of discrimination against Russian media by Facebook since October 2020, including restrictions in recent days on state-backed channels like RT and the RIA news agency.

The move is a major escalation in an ongoing confrontation between big tech companies and Russia, which has in recent years issued a slew of fines and hobbled services through slowdowns. The tensions have ramped up amid Russia’s invasion of Ukraine, which Moscow calls a “special operation.”

Meta’s head of global affairs Nick Clegg said the company would continue to do everything it could to restore its services.

“Soon millions of ordinary Russian will find themselves cut off from reliable information, deprived of their everyday ways of connecting with family and friends and silenced from speaking out,” he said, in a statement posted on Twitter.

Last week, Moscow said it was partially limiting access to Facebook, a move the company said came after it refused a government request to stop the independent fact-checking of several Russian state media outlets. On Saturday, Twitter also said its service was being restricted for some Russian users.

Major tech companies have faced pressure to respond to the Feb. 24 invasion, which has led to economic sanctions against Moscow by governments around the world. Russian state-run media has emerged as a key flashpoint between Moscow and social media platforms during the conflict.

Russia has made several moves to crack down on foreign news media in recent days. It cut access to several news organizations’ websites, including the BBC, Voice of America, and Radio Free Europe/Radio Liberty for spreading what it says is false information about its actions in Ukraine.

Meta had about 7.5 million users on Facebook in Russia as of last year and 122.2 million users across its other services, including Instagram, WhatsApp, and Messenger, according to estimates from Insider Intelligence. The leading Russia-based social network VK had 63 million users, the researcher estimated.

Popular VPN apps have been downloaded more than 1.3 million times in Russia since its invasion of Ukraine began, according to data from researcher AppFigures, which described the figure as a major surge.

Roskomnadzor said in its statement that Meta had restricted access to the accounts of state-backed news outlets in recent days, listing RT, Sputnik, the RIA news agency, the defense ministry’s Zvezda TV, and websites gazeta.ru and lenta.ru.

It said such restrictions violated the key principles of freedom of information and Russian internet users’ unimpeded access to Russian media.