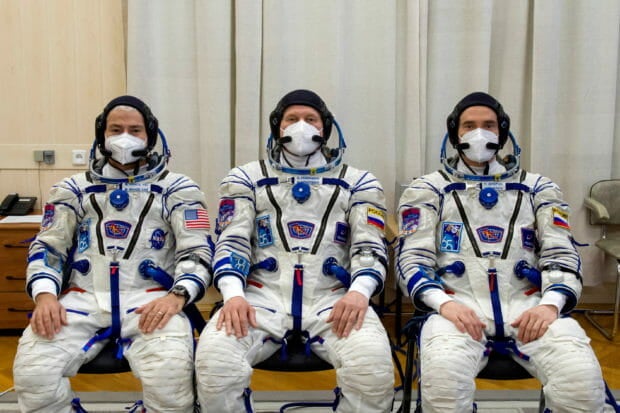 A U.S. astronaut is still slated to share a ride back from the International Space Station with two cosmonauts aboard their Soyuz capsule later this month, despite U.S.-Russian antagonism over the war in Ukraine, NASA officials said on Monday.

“We both need each other to operate the International Space Station,” Montalbano told a news briefing on two upcoming ISS spacewalks by NASA crew members, the first of which was to begin on Tuesday.

The durability of longstanding U.S.-Russian collaboration in space was called into question last month when Dmitry Rogozin, head of Russia’s space agency, Roscosmos, suggested U.S. sanctions imposed against Moscow over the Ukraine crisis could “destroy” ISS teamwork and lead to the demise of the space station itself.

When U.S. President Joe Biden announced high-tech export restrictions on President Vladimir Putin’s government on Feb. 24, he said they were designed to “degrade” Russia’s aerospace industry, including its space program.

At about the same time, Moscow said it had ceased joint ISS research with Germany and forced the 11th-hour cancellation of a satellite launch British broadband company OneWeb had planned to conduct from Russia’s Baikonur Cosmodrome in Kazakhstan.

Asked whether escalating geopolitical tensions over Putin’s invasion of Ukraine, which Russia calls a “special military operation,” might spill over to undermine morale or U.S.-Russian cooperation on the space station, Montalbano insisted ISS “interdependency” between the two former space rivals remains firmly intact.

“When you’re in space, there’s no borders. You don’t see country lines or state lines,” Montalbano told reporters. “The teams continue to work together. Are they aware of what’s going on on Earth? Absolutely. But the teams are professional,” he added. “They’ve trained to do a job, and they’re going to do that job.”

NASA astronaut Mark Vande Hei, who flew to the orbital outpost aboard a Russian Soyuz spacecraft launched last April from Baikonur, is due to return to Kazakhstan on March 30 in a different Soyuz craft with cosmonaut peers Pyotr Dubrov and Anton Shkaplerov.

Logging a NASA record-breaking 355 days in orbit by the time he returns, Vande Hei will be greeted in Kazakhstan by a team of about 20 NASA personnel flying into the former Soviet republic for the homecoming as they have for previous ride-sharing liftoffs and landings by U.S. astronauts over the years, Montalbano said.

The new three-member cosmonaut team replacing Vande Hei, Dubrov and Shkaplerov aboard the ISS is expected to arrive on the orbiting laboratory on March 18 as planned, Montalbano added.

He said NASA was also still in talks with Roscosmos on a new “crew exchange” deal that would pave the way for astronauts and cosmonauts to routinely share flights to the space station on each other’s spacecrafts.

NASA began paying to fly its astronauts to ISS aboard Soyuz after the U.S. space shuttle ended in 2011, only resuming launches from U.S. soil aboard SpaceX rockets over the past two years. None of those crews have included cosmonauts.