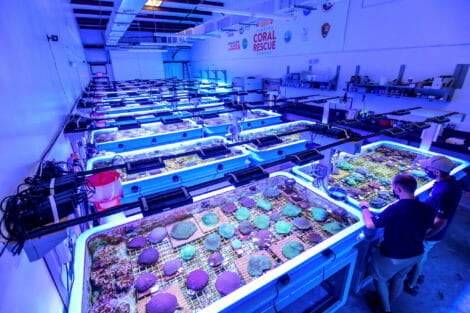 A view of corals in tanks at the Florida Coral Rescue Center in this undated handout photo released by Seaworld. Seaworld/Handout via REUTERS

Scientists have successfully bred a threatened species of coral as part of a project that hopes to restore damaged reefs off the coast of Florida that are under threat by a relatively new disease, a coral rescue organization said Thursday.

Reefs in Florida and the Caribbean are facing a growing threat of destruction by the Stony Coral Tissue Loss Disease that strips coral of its color and ultimately its life altogether.

The Florida Coral Rescue Center has in recent weeks bred hundreds of new coral of a species called rough cactus coral at a 2,000-square-foot (185.80-square-meter) facility that houses a total of 18 Florida coral species that are threatened by the disease.

Stony Coral Tissue Loss Disease was first observed near Miami in 2014 and by 2017 had spread to Florida’s northernmost reef tract and later past Key West to the south.

Species that fall victim to it have a mortality rate of 66-100 percent, making it deadlier than the better-known coral bleaching phenomenon that is typically caused by higher water temperatures associated with climate change.

The Florida Coral Rescue Center is in part funded by the Disney Conservation Fund and Fish & Wildlife Foundation of Florida.

Stony Coral Tissue Loss Disease represents another threat to the world’s coral reefs, which already face an existential threat due to climate change.

The Global Coral Reef Monitoring Network (GCRMN), a U.N.-supported global data network, in October said that 14% of the world’s coral on reefs was already lost between 2009 and 2018.

Damage to coral reefs is among the myriad of issues that activists are seeking to raise awareness of during this year’s observance of Earth Day on Friday, April 22.

How is the latest research trying to protect coral from global warming?