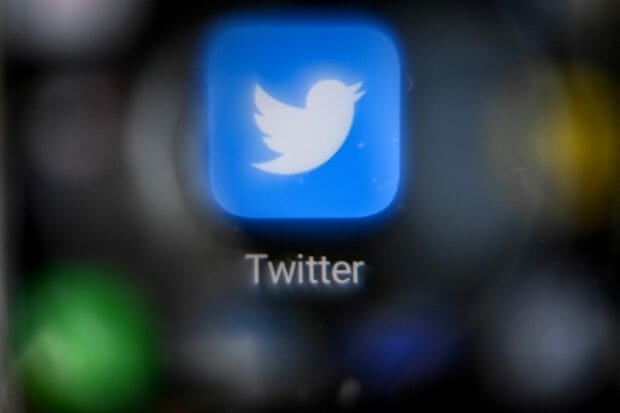 (FILES) This file photo taken on October 12, 2021, shows the logo of US social network Twitter on a smartphone screen in Moscow. Stock markets were relatively subdued on April 4, 2022, while oil prices rose as Western nations eyed more sanctions on Russia, but Twitter stood out as its shares soared after Elon Musk purchased a major stake in the social network. (Photo by Kirill KUDRYAVTSEV / AFP)

Twitter’s announcement on Earth Day came as it tries to fend off an unwanted takeover bid by billionaire Elon Musk, who has said he thinks people should be able to say pretty much whatever they want on the platform.

“We believe that climate denialism shouldn’t be monetized on Twitter, and that misrepresentative ads shouldn’t detract from important conversations about the climate crisis.”

Twitter last year introduced a Topic feature to help users find conversations about climate change, and rolled out hubs of “credible, authoritative” information on an array of high-profile topics including the science backing climate change.

“We recognize that misleading information about climate change can undermine efforts to protect the planet,” Junod said.

“Now more than ever, meaningful climate action, from all of us, is critical.”

As tempting as access to Musk’s wealth may be, Twitter is not eager to be ruled by a billionaire known for shooting from the hip with little regard for the consequences.

The global one-to-many messaging platform is moving to prevent Musk from getting his hands on all of Twitter’s outstanding shares, signaling that worries about where he would lead the company outweigh the proffered payoff.

Earlier this month Musk, the world’s richest person and a controversial and frequent user of Twitter himself, made an unsolicited bid of $43 billion for the social media network, citing better freedom of speech as a motivation.

Musk advocates a hands-off approach to policing content, a thorny matter particularly in high-profile cases such as that of former US president Donald Trump, who was banned after the assault on the Capitol by his supporters as they sought to overturn the US election result last year.

But the polarizing Tesla CEO’s campaign has also sparked concern among technology and free-speech experts who point to Musk’s unpredictable statements and history of bullying critics, which contradict his stated aims.

Twitter’s board opted to employ a “poison pill” defense, under which any acquisition of over 15 percent of the firm’s stock without its OK would trigger a plan to flood the market with shares and thus make a buyout much harder.