The hearts functioned normally, with no signs of rejection during the three-day experiments in June and July, they said at a news conference.

The experiments followed the death in March of a 57-year-old man with terminal heart disease who made history two months earlier at the University of Maryland as the first person to receive a genetically modified pig heart. The reasons why his new heart eventually failed are still unclear.

NYU procured the hearts from pigs engineered by Revivicor Inc and screened them for viruses using an enhanced monitoring protocol, the researchers said. The hearts showed no evidence of a pig virus called porcine cytomegalovirus that was detected in the blood of the Maryland man and may have contributed to his death.

The pigs had four genetic modifications to prevent rejection and abnormal organ growth and six to help prevent incompatibilities between pigs and humans. 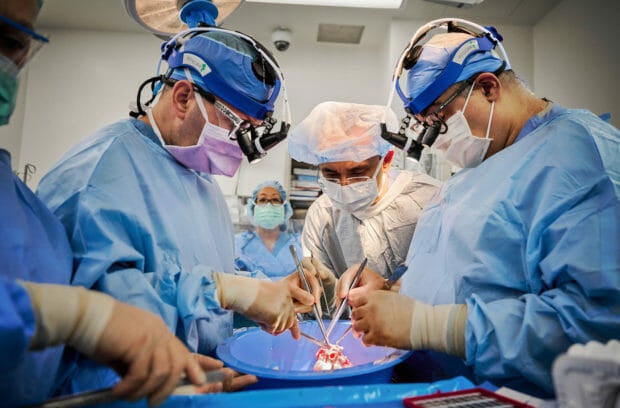 For now, they believe xenotransplantation is safer in brain-dead recipients than in living patients and also more informative because biopsies can be done more often.

More-frequent testing provides tremendous detail, said Dr. Robert Montgomery, director of the NYU Langone Transplant Institute, and a recipient of a heart transplant at NYU. “We were able in real time to capture everything that was going on during that 72-hour period,” he said.

The procurement, transport, transplant surgery, and immunosuppression were all performed the same way as in typical human heart transplants, the researchers said.

“Our goal is to integrate the practices used in a typical, everyday heart transplant, only with a nonhuman organ that will function normally without additional aid from untested devices or medicines,” said Dr. Nader Moazami, surgical director of heart transplantation at NYU Langone.

The 72-hour experiments produced preliminary data, leaving many questions to be answered before starting human pig heart trials, he added.