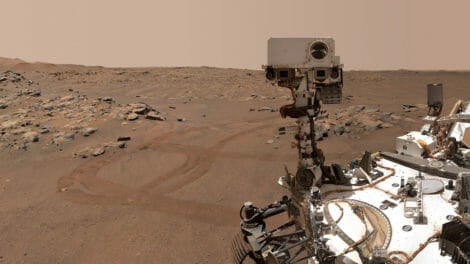 FILE PHOTO: NASA’s Perseverance Mars rover is seen in a “selfie” that it took over a rock nicknamed “Rochette”, September 10, 2021. NASA/JPL-CALTECH/MSSS/Handout via REUTERS

WASHINGTON — Core samples drilled by NASA’s Perseverance rover on the Martian surface are revealing the geology of gaping crater scientists suspect may have harbored microbial life billions of years ago, including surprises about the nature of the rock present there.

The samples, obtained by the car-sized, six-wheeled robotic rover and stored for future transport to Earth for further study, showed that rock from four sites inside Jezero crater is igneous – formed by the cooling of molten material. The rocks also bore evidence of alteration through exposure to water, another sign that cold and arid Mars long ago was warm and wet.

The scientists had thought the rock, formed roughly 3.5 billion years ago, might be sedimentary, formed as mud and sand deposited in a lakebed.

“In fact, we found no evidence of sedimentary rocks where the rover explored the crater floor, despite the fact we know the crater once held a lake and sediment must have been deposited. Those sedimentary deposits must have eroded away,” said Caltech geochemist Kenneth Farley, lead author of one of four studies published in the journals Science and Science Advances describing the crater’s geology. 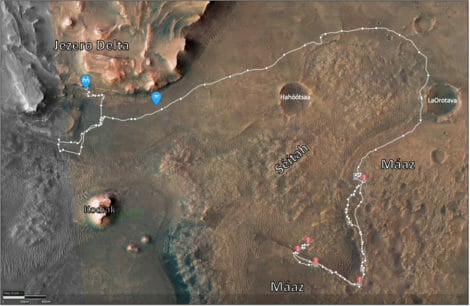 FILE PHOTO: A view of an image overlaid with the path taken by NASA’s Perseverance rover since it landed in Jezero Crater on the surface of Mars February 18, 2021, tracing its route from an area called Seitah to Maaz and to its present location at one of the main features in the crater, identified as an ancient river delta (upper left). Red points indicate crater floor sampling locations; blue points indicate the present locations of the Perseverance Rover (at left) and the Ingenuity helicopter. NASA/Handout via REUTERS

Perseverance arrived on Mars in February 2021 and has been busily working in Jezero crater since then, using a suite of instruments, as scientists probe whether Earth’s closest planetary neighbor ever possessed conditions conducive to life.

It is gathering rock samples, about the size of blackboard chalk, in small tubes due to be retrieved by a spacecraft in 2033 and brought to Earth for further examination including for biosignatures – indicators of life.

Jezero crater is 28 miles (45 km) wide, located just north of the Martian equator. It appears the area once was abundant with water and home to a river delta, with river channels spilling over the crater wall to form a large lake. Scientists suspect the crater could have harbored microbial life, with evidence perhaps contained in lakebed or shoreline rock.

Perseverance is now collecting samples in the delta area. 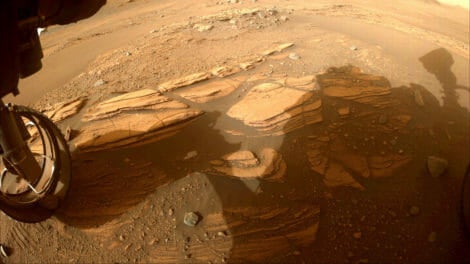 The crater’s igneous rocks were found to have interacted with water, making new minerals and depositing salts, though this water apparently was either in low abundance or not present very long – likely groundwater. But the water’s presence suggests this might have been a habitable environment at the time, the researchers said.

“We collected samples that will be returned to Earth, and they should provide critical evidence of what kinds of organisms, if any, inhabited the Jezero crater floor rocks when they were interacting with water,” said Yang Liu, a planetary sample scientist at NASA’s Jet Propulsion Laboratory and lead author of one of the studies.

The four samples were drilled from two areas, one called Seitah and the other Maaz. The Seitah rock appears to have formed underground through slow cooling of a thick sheet of magma. The Maaz rocks may have cooled relatively more quickly in an upper layer of underground magma or after a volcanic surface eruption. Either way, any rock layer that once covered these areas has since eroded away, either from water or wind. 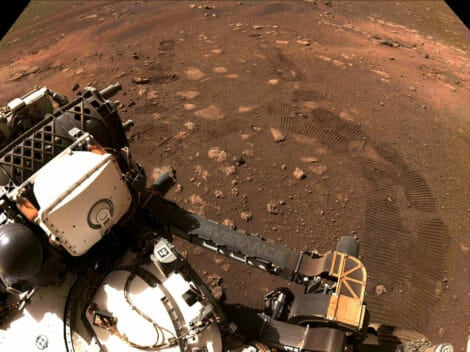 FILE PHOTO: Wheel tread marks are left in the soil of Jezero Crater on Mars, as NASA’s Mars rover Perseverance drives on Martian surface for the first time, in this March 4, 2021 image supplied to Reuters. Image taken March 4, 2021. NASA/JPL-Caltech/Handout via REUTERS

Liu said the Seitah samples were a coarse-grained igneous rock containing the mineral olivine, noting that three Martian meteorites found on Earth have a similar composition.

Examining the samples back on Earth may reveal when the rock was formed and give a firmer answer to when liquid water existed on the Martian surface. Liquid water is a key ingredient for life.

“Understanding when, and for how long, the climate conditions on Mars allowed for the stability of liquid water is of central importance to the larger questions that we are attempting to address with this mission and sample return – on whether and when life could have once existed on early Mars, billions of years ago,” said geochemist and study co-author David Shuster of the University of California, Berkeley.