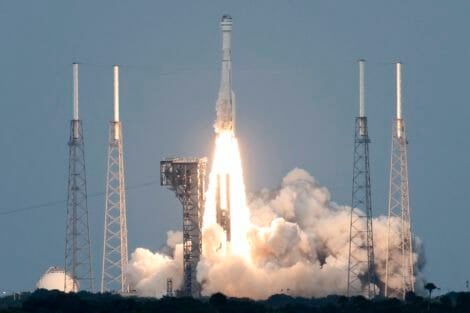 Washington, United States — The first crewed flight of Boeing’s space capsule Starliner is scheduled for February 2023, the company and NASA announced Thursday, as the United States seeks to secure a second way for its astronauts to reach the International Space Station.

Since 2020, American astronauts have traveled to the ISS aboard SpaceX’s vessels but the US space agency wants to widen its options.

After a series of hiccups in its space program that led to serious delays, including a 2019 flight that did not reach the ISS, Boeing finally managed to send the gumdrop-shaped capsule to the station in May – without a crew.

This time, the aerospace giant will send the Starliner up with humans aboard, to earn NASA’s green light to begin regular missions – at an expected pace of one per year.

“We’re in good shape to execute these plans to be ready for that flight in February,” added Mark Nappi, the Starliner program manager at Boeing.

They are expected to be docked for eight days at the ISS, where they will conduct a series of experiments, said ISS program manager Joel Montalbano.

“Our agency goal is to get two US commercial providers up and running as soon as we can.”

Boeing had hoped to conduct this test flight before the end of the year, but a few glitches experienced in the uncrewed May flight led to necessary adjustments to the vessel.

An issue was detected in the propulsion system: two thrusters responsible for placing Starliner in a stable orbit failed, though officials insisted there was plenty of redundancy built into the system to overcome the problem.

Boeing’s teams later determined that “debris-related conditions” were to blame, Nappi said, adding that the origin of said debris was still unknown.

Some filters were removed to fix a pressure problem, and flight software was updated to avoid a data overload.

Boeing and SpaceX were awarded contracts in 2014, shortly after the end of the space shuttle program, during a time when the United States was left reliant on Russian Soyuz rockets for rides to the ISS.