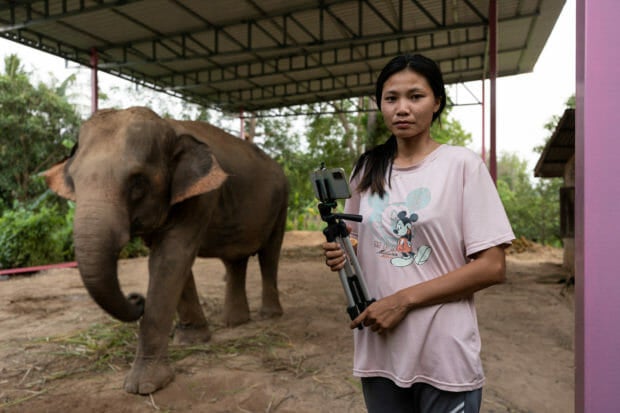 Elephant owner Siriporn Sapmak, 23, poses while holding her gear used for social media live-streaming outside her house, at Ba Ta Klang village in Surin, Thailand April 6, 2022. “I take care of two elephants, Prakai Kaew and Bai Fern,” Siriporn Sapmak said to her audience on social media. “We live-stream and sell fruit to make money to buy food for our elephants, because we haven’t had a job for over three years. Lots of things have changed and we have to survive and find a way to feed our elephants.” REUTERS

SURIN, Thailand (Reuters) – In the northeastern village of Ban Ta Klang in Thailand, Siriporn Sapmak starts her day by doing a livestream of her two elephants on social media to raise money to survive.

The 23-year old, who has been taking care of elephants since she was in school, points her phone to the animals as she feeds them bananas and they walk around the back of her family home.

Siriporn says she can raise about 1,000 baht ($27.46) of donations from several hours of livestreaming on TikTok and YouTube but that is only enough to feed her two elephants for one day.

It is a new – and insecure – source of income for the family, which before the pandemic earned money by doing elephant shows in the Thai city of Pattaya. They top up their earnings by selling fruit.

Like thousands of other elephant owners around the country, the Sapmak family had to return to their home village as the pandemic decimated elephant camps and foreign tourism ground to a virtual halt. Only 400,000 foreign tourists arrived in Thailand last year compared with nearly 40 million in 2019.

Some days, Siriporn doesn’t receive any donations and her elephants are underfed.

“We are hoping for tourists to (return). If they come back, we might not be doing these livestreams anymore,” she said.

“If we get to go back to work, we get a (stable) income to buy grass for elephants to eat.”

Edwin Wiek, founder of Wildlife Friends Foundation Thailand, estimates that at least a thousand elephants in Thailand would have no “proper income” until more tourists return.

Wiek said the Livestock Development Department needs to find “some kind” of budget to support these elephants.

“Otherwise, it’s going to be difficult to keep them alive I think for most families,” he said.

The families in Ban Ta Klang, the epicentre of Thailand’s elephant business located in Surin province, have cared for elephants for generations and have a close connection to them.

Elephant shows and rides have long been popular with tourists, especially the Chinese, while animal rights groups’ criticism of how elephants are handled there has given rise to tourism in sanctuaries.

“Without the elephants, we don’t know what our future will look like. We have today thanks to them.”

The government has sent 500,000 kilograms of grass across multiple provinces since 2020 to help feed the elephants, according to the Livestock Development Department, which oversees captive elephants.

Elephants, Thailand’s national animal, eat 150 kg to 200 kg each day, according to the Wildlife Conservation Society.

Siriporn and her mother, however, said they have not yet received any government support.

He said the government plans to assist elephants and their caretakers and that “measures along with a budget will be proposed to cabinet,” without giving a time frame.

While the government is expecting 10 million foreign tourists this year, some say this may not be enough to lure elephant owners back to top tourist destinations, given the costs involved. Chinese tourists, the mainstay of elephant shows, have also yet to return amid COVID-19 lockdowns at home.

“Who has the money right now to arrange a truck… and how much security (do) they have that they are really going to have business again when they go back?,” said Wiek.

He expected more elephants to be born in captivity over the next year, exacerbating the pressures on their owners.

“Some days we make some money, some days none, meaning there’s going to be less food on the table”,” said Pensri.

“I don’t see a light at the end of the tunnel.”

Animal attractions in Thailand run out of money