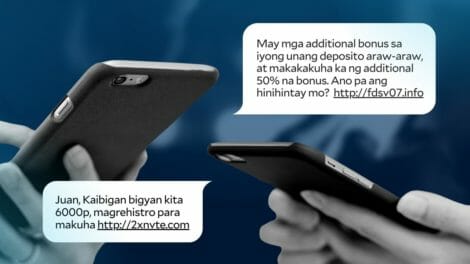 MANILA, Philippines — The National Telecommunications Commission (NTC) has ordered its regional officers, as well as telecommunication firms, to intensify warnings against text scams amid a persistent proliferation of unsolicited text messages to phone users.

In two memoranda dated September 8, the NTC reiterated the urgency to address the spread of personalized text messages indicating hoax job offers and bonus cash prizes, among others.

One of the memoranda tasked NTC regional directors and officers-in-charge to go to various local radio and television stations at least 10 times from September 9-15 for the dissemination of warning notices.

“In the interest of the service, you are once more directed to appear before different local radio and television stations within your respective jurisdictions at least ten (10) times to warn the public against the continuing text scams from 09 September 2022 to 15 September 2022 and to expand your respective local public information campaigns to educate the public of these scams,” the memo reads.

Meanwhile, the other memorandum was addressed to telecommunication firms Dito Telecommunity, Globe Telecoms, and Smart Communications.

READ: Telco contractors may be sources of data in text scams

The NTC requested the companies to send a text blast to their subscribers daily from September 9-15 with the message:

(Warning. Do not believe text messages that contain your name and offer jobs, reward, or money. This is a scam.)

The telco firms are likewise instructed to expedite the blocking of SIM cards used by scammers.

“You are also directed to accelerate the process of blocking SIM cards that are being utilized to perpetrate these fraudulent activities and to further expand the messaging reach of your respective public information campaigns to the public regarding these new variants of text scams,” the memo states.

So far, the NTC has responded to 800 text scam complaints filed this year.

The agency then urged phone users to lodge a text scam complaint through the NTC hotline 8966-7722.