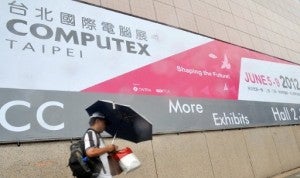 Acer showed off the tablets – named W510 and W700 – on the eve of Computex, Asia’s largest IT fair, which is held in Taipei this week for the 32nd time, with Windows 8 expected to be a key focus.

“Windows 8 is a historic moment for the worldwide Windows eco-system,” said J. T. Wang, Acer’s chairman, at a briefing in Taipei where the company also unveiled its new Aspire S7, a small laptop that runs on Windows 8.

Acer, which has been struggling to branch into the tablet computer sector, cut several hundred jobs in Europe last year to reduce operating expenses.

While Apple itself is not present at Computex, the fair will nevertheless highlight the company’s importance, since much of what happens there will be in response to market trends set by the American brand.

Windows 8 is touted as Microsoft’s long-awaited riposte to the rise of Apple and mobile devices powered by Google’s Android operating system. There is no official release date but reports have predicted an October launch.

“In our view, the touchscreen experience enabled by Windows 8 is a massive step forward – simply because it makes computing more intuitive,” said Jim Wong, corporate president of Acer.

Computex features more than 1,800 exhibitors registering 5,400 booths, up two percent from a year ago.

The organizers estimate that the IT fair will draw 36,000 foreign buyers who may place bulk orders worth up to $28 billion.