Xbox 360 synchs with smartphones and tablets 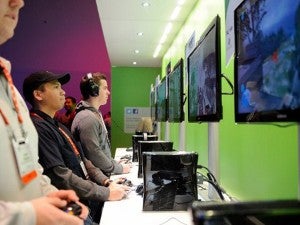 LOS ANGELES—Microsoft on Monday continued its quest to be at the heart of home entertainment by synching Xbox 360 videogame consoles to smartphones and tablets while adding more blockbuster content.

“Your devices aren’t so smart because they aren’t working together,” Marc Whitten of Xbox Live online entertainment service said at a press event on the eve of the start of the premier E3 videogame gathering in Los Angeles.

“Xbox Smartglass transforms devices you already own and love… movies are more immersive; games are more thrilling,” he continued. “I can now take my phone and use it as the world’s best remote control.”

The Smartglass application to be released worldwide by the end of the year could drain some of the enthusiasm that Nintendo has been working to build for its next generation Wii U console featuring a tablet-style GamePad controller.

GamePads, the price of which is expected to be revealed at a Nintendo press conference here on Tuesday, are an extra gadget gamers would need to incorporate into their lives while Smartglass will let them use gadgets they already own.

Nintendo has an advantage in that major publishers such as France-based Ubisoft are readying hot titles to release with Wii U GamePad consoles while Microsoft on Monday invited game developers to begin imagining possibilities.

“We are opening the door for creative multi-screen entertainment,” Whitten said. “Game makers can envision brand new ways to make all our games better.”

Smartglass also capitalizes on the growing popularity of using Xbox Live to stream movies, music and other entertainment from the Internet.

The application lets people start watching a film on a tablet and then easily switch to home television screens without breaking continuity, a demonstration showed.

After a film routes to a television, the tablet automatically begins displaying supplementary information about actors or other topics related to the movie being watched.

“Xbox is on a mission to make the entertainment that you love even more amazing,” Microsoft Interactive Entertainment Business president Don Mattrick.

“With Xbox SmartGlass, we are lighting up entertainment across your phone, tablet, PC and TV in a completely new way.”