On New Zealand farm, scientists reduce cow burps to save the world 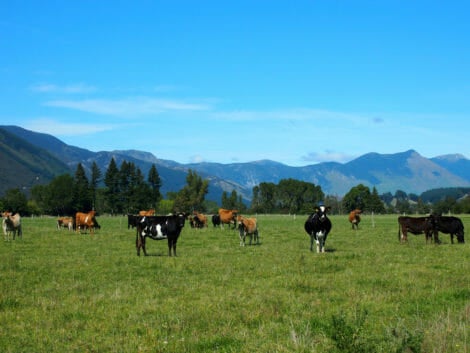 PALMERSTON NORTH, New Zealand — More than a dozen calves wait at a research farm in New Zealand to be fed Kowbucha, a punnily named probiotic that studies show reduces burps – or methane emissions.

The Kowbucha powder is blended into a milk-like drink fed to the calves at the Massey University farm in Palmerston North.

The regular feeds are part of a series of trials being carried out by New Zealand dairy giant Fonterra since 2021 to gauge how effective the probiotic is in reducing methane emissions. New Zealand has pledged to cut biogenic methane emissions by 10% on 2017 levels by 2030 and up to 47% by 2050.

The “true eureka moment” came when early trials suggested that calves emit up to 20% less methane when they receive the probiotic supplement, said Shalome Bassett, principal scientist at Fonterra Research and Development Center.

“Probiotics are great because they’re a really natural solution,” Bassett told Reuters. “Whatever we do, it has to be something that’s easy for the farmer to use, has to be cost effective, and we have to ensure that it’s good for the cow and doesn’t have any effect on the milk.”

Ongoing trials have shown similar, promising results, she said. If that continues, Fonterra hopes to have Kowbucha sachets in stores by the end of 2024, Bassett said, before farmers have to start paying for animal burps.

Fonterra said it did not yet have any pricing information for the sachets.

Some feed additives available abroad have proved to be more efficient. Royal DSM’s Bovaer feed additive can reduce methane emissions by 30% in dairy cows and by more in beef cattle.

Fonterra said Kowbucha likely provides an easier solution generally as farmers only have to feed it to calves when they are being reared, given it is expected to have a lasting impact.

New Zealand will in 2025 become the first country to price agricultural emissions, including methane emissions from burping cows and sheep, whose digestive systems produce methane when breaking down vegetation. Agricultural emissions account for around half of the country’s greenhouse gas emissions.

Ahead of that, farmers, businesses and scientists are working on ways to cut emissions without reducing herd number, given agricultural products make up more than 75% of the country’s goods exports.

As well as the early optimism around Kowbucha, AgResearch scientists said in December they had successfully bred low-methane producing sheep, while a product called EcoPond that almost eradicates methane in farm sewage has been on sale since late 2021.

New Zealand is also considering whether supplements that have had success abroad can be adapted locally. Much of the science overseas focuses on altering barn animals’ food and is harder to implement in a country where animals largely live outdoors and eat grass.

“The easiest way to reduce emissions is to reduce production or have less animals basically, so that’s a real challenge when we’re trying to also produce food and keep our export returns at the level that we want them,” said ANZ agricultural economist Susan Kilsby.

Ahead of 2025, the government has released a proposal where biogenic methane and long-lived gases will be priced separately but those prices will be set by the government.

While pricing farm emissions is not universally popular, many believe it is the push farmers need to reduce them.

Mike Manning, general manager of innovation and strategy at agricultural cooperative Ravensdown, said farmers have been slow to adopt its EcoPond technology without financial incentives.

The system cuts up to 99% of the methane emitted from the manure-sludge left behind in a dairy shed after milking.

“People go ‘well, I might wait until I have a price of methane then I have a financial driver’,” Manning added.

New Zealand’s government said in May it would spend NZ$380 million ($213.22 million) on research over four years to counter agricultural emissions.

The cash injection may accelerate research and get some emerging technologies into the hands of farmers and growers “much earlier” said Sinead Leahy, principal science advisor at government-funded Agricultural Greenhouse Gas Research Center.

A lot of research is already under way.

After discovering that some sheep naturally produce less methane than others, AgResearch headquartered in Hamilton bred sheep with this inheritable trait with one another and found that the lowest emitting sheep produced close to 13% less methane than the highest emitters.

If such breeding were to be carried out on a national level, it could reduce New Zealand’s methane emissions by up to 1%, said AgResearch.

The dairy industry is now looking at how to apply that research to cows, Leahy said.

For Fonterra, research also remains key as it aims to cap farm emissions at 2015 levels. In addition to Kowbucha, it is also trialling other feed additives and seaweed.

“It’s definitely important for us to be leading in this space. Our farmers need a solution and New Zealand needs a solution,” said Bassett.