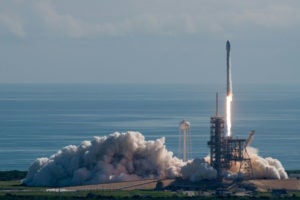 Washington, United States — A US military space drone landed at the Kennedy Space Center in Florida on Saturday after nearly two and a half years in orbit, Boeing said.

The unmanned X-37B shuttle, whose first flight took place in 2010, has now spent a total of more than 10 years in space and flown more than 1.3 billion miles during six missions, Boeing said in a statement.

“This mission highlights the Space Force’s focus on collaboration in space exploration and expanding low-cost access to space for our partners, within and outside of the Department of the Air Force,” said General Chance Saltzman, chief of space operations.

Launched in secrecy, the X-37B was designed for the Air Force by United Launch Alliance, a joint venture between Boeing and Lockheed Martin.

It is 30 feet (nine meters) long, has a 15-foot wingspan and is powered by solar panels.

Before the shuttle’s last launch, in May 2020, the Pentagon evoked a series of scientific experiments it would undertake.

The mission was to test how certain materials react in space, to evaluate how ambient radiation in space affects a series of seeds, and to transform solar radiation into radio-electric energy, the army said.