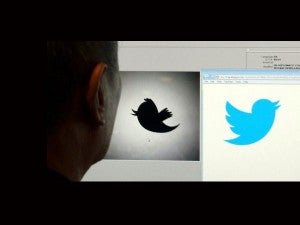 A man looks at a computer monitor showing the and old and new (R) Twitter logos Wednesday in Washington DC. Twitter unveiled the new ‘Twitterbird’ as the new trademark symbol for the fast-growing company. AFP

SAN FRANCISCO – Twitter has unveiled a new “Twitterbird” which will be the new trademark symbol for the fast-growing company.

“Over the past six years, the world has become familiar with a little blue bird. The bird is everywhere, constantly associated with Twitter the service, and Twitter the company,” said creative director Doug Bowman.

“Starting today (Wednesday) you’ll begin to notice a simplified Twitter bird. From now on, this bird will be the universally recognizable symbol of Twitter… There’s no longer a need for text, bubbled typefaces, or a lowercase ‘t’ to represent Twitter.”

The new bird “grows out of love for ornithology, design within creative constraints, and simple geometry,” Bowman said.

“This bird is crafted purely from three sets of overlapping circles — similar to how your networks, interests and ideas connect and intersect with peers and friends. Whether soaring high above the earth to take in a broad view, or flocking with other birds to achieve a common purpose, a bird in flight is the ultimate representation of freedom, hope and limitless possibility.”

Twitter, which allows its members to post brief comments, links or pictures, claims to have more than 140 million active users, with the largest number being in the United States.

A recent survey found one out of seven Americans who go online use Twitter and eight percent do it every day.