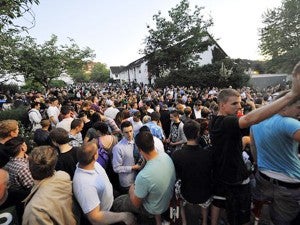 Over 1,500 party goers gather in Hamburg, Germany, to celebrate with their Facebook friend, Thessa. The host, a teenager who forgot to mark her birthday invite in Facebook as private, escaped from her own party when things got a bit too crowded for comfort.

A teenage girl in Germany who forgot to mark her birthday invitation as private on Facebook fled her own party when more than 1,500 guests showed up, and around 100 police officers, some on horses, were needed to keep the crowd under control.

The birthday girl, identified only as Thessa, went into hiding, Streiber said, but “nonetheless the party was a hit.”

Thessa had initially only wanted to ask some friends over to her home in Hamburg-Bramfeld when she posted her invitation on Facebook, but mistakenly published it so that everyone on Facebook could see it.

The invitation quickly went viral, and some 15,000 people confirmed online they would come to the party — without even knowing the girl, weekly paper Bild am Sonntag reported.

When Thessa’s parents found out, they made their daughter cancel the party, informed police and hired a private security service to protect their home on Friday night.

Despite public announcements in Hamburg that the party had been canceled, some 1,500 teenagers and young adults showed up on the street in front of Thessa’s home, Streiber told The Associated Press.

“We had cordoned off the house, some 100 police were on the ground, four of them on horses — but that did not keep the kids from celebrating,” Streiber said.

Some revelers held up signs asking “Where is Thessa?” others brought birthday presents and homemade cake, there was lots of alcohol and the crowd chanted again and again, “Thessa, celebrating a birthday is not a crime,” — in obvious relation to the massive police presence, Bild reported.

The police officer was injured when he tried to keep a party reveler from breaking off the Mercedes-Benz logo of his patrol car.

“It was sheer insanity but mostly peaceful,” Streiber summed up the night with a laugh.

As for Thessa — she was nowhere to be seen. Police confirmed she “was not at home that night” and Bild reported that she celebrated quietly with her grandparents at an undisclosed location.