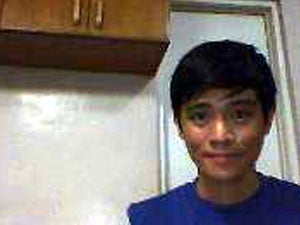 The event, held at Delft University of Technology in the Netherlands last  May 11 to 13, brought together the brightest researchers from four preliminary regional rounds, namely, North America; Europe; Russia and the Commonwealth of Independent States; and Asia-Pacific, Middle East and Africa, to compete for the top awards.

“We are very happy that our undergraduate research paper got first place. We did not expect it would stand a chance against post-graduate students’ papers from all over the world,” Lat said.

Team member Bondoc said, “We were already very happy to have reached the International Cup and represent the country, but winning it proved that we can compete with other countries when it comes to cyber technology.”

Third teammate Atienza, who was in Warsaw, Poland, when he learned the news, said that he was impressed with Lat’s presentation skills that made them win the competition.

“This student conference provides a motivation and incentive for students to improve the qualities of their research. I’m grateful for Kaspersky Lab for providing students like us this opportunity,” he said.

As part of his prize, Lat, the paper’s main author and the one who made the presentation in the Netherlands, was invited to be a part of the program committee for the competition next year.

Second prize went to Iwan Gulenko from the University of Munich in Germany, who presented a research paper entitled “Concept and Development of a Facebook Application to Raise Security and Risk Awareness Regarding Social Engineering.” His paper won for him 1000 euros.

Meanwhile, Napa Sae-Bae of the Polytechnic Institute of New York University (New York Poly) took third place with her research on “Biometric-Rich Gestures: A Novel Approach to Authentication on Multitouch Devices,” for which she received 750 euros as cash prize.

It was the third year that Asian countries were allowed into the competition and the first time that a team from the Philippines reached the final rounds.

The Philippines was represented by two teams in the regional cup held at the City University of Hong Kong in Hong Kong last March 14 to 16 and they won the top two prizes.

“The quality of the student papers is absolutely outstanding and I am amazed to see the level of research presented across all the papers selected for the conference,” said jury member Priyadarsi Nanda, professor at Sydney’s University of Technology.

“I believe such initiatives by Kaspersky Lab play a major role in bringing academics, security experts at Kaspersky Lab and, most importantly, the best student brains closer to each other and promoting the culture of education and research around the world,” he said.

The annual conference has been held since 2008. The most promising student papers submitted to the organizers are selected, and those nominees are invited to participate in the conference.

There, teams are given the opportunity to present their research work, competing with their fellow participants from other universities, as well as attend master classes and presentations from industry experts, and to join those experts in discussions on contemporary IT security problems.

Regional rounds of the conference are held in North America, Europe, Asia-Pacific and the Middle East, and Russia and the Commonwealth of Independent States—referring to former Soviet members—with the strongest candidates progressing to the final phase.

“Creating a secure and reliable infrastructure is one of the biggest challenges we face in a globalized economy and it is imperative that we get the brightest minds to tackle this problem,” Kaspersky said in a statement.

“The Kaspersky challenge is a great example of how we can excite and challenge talented students from around the world and make them aware of the challenges we face,” the company said.