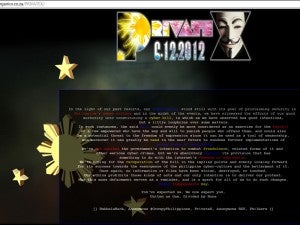 MANILA, Philippines — The website of the Office of the Vice President (OVP) was hacked late Tuesday.

Identifying itself as a PrivateX, the group left a message on ovp.gov.ph, saying the proposed cyber bill could be a threat to freedom of expression.

The hackers said they were hoping for the “recuperation” of the bill, saying it contained loopholes and could be used by powerful people for “worse forms of censorship.”

“The said bill could evenly be more considered as an exercise for the benefit of a few empowered who have the way and will to punish people who offend them, and could also be a potential threat to the freedom of expression since it can be used as a tool of censorship, and moreover it can greatly be used in the near future to condone further implementations of worse forms of censorship,” the hackers said in their message.

They said that their mass defacement served as their protest and that their organization maintained a goal of “proclaiming security in Philippine’s cyber culture.”

“Once again, no information or files have been stolen, destroyed, or touched. Our ethics prohibits those kinds of acts and our only intention is to deliver our protest,” the message read.

The message also contained the statement “You’ve expected us. We now expect you. United as One, Divided by None.” It also included the words “HukbalaHack, Anonymous #OccupyPhilippines, PrivateX, Anonymous BXU, Philkers.”

When INQUIRER.net reached Binay’s camp for comments, Joey Salgado, spokesperson of the OVP, said that they would check and would have something more definite by Wednesday.

The hacking incident happened a day after Binay gave a speech at the closing ceremonies of the Seminar Towards ICTD and Cybersecurity Enhancement at the National Defense College of the Philippines in Quezon City, where he detailed how the country needed to shape up against cyber threats to protect the nation’s sovereignty.

Binay has joined lawmakers in pushing for the passage of the Cyber Security Act of 2012.