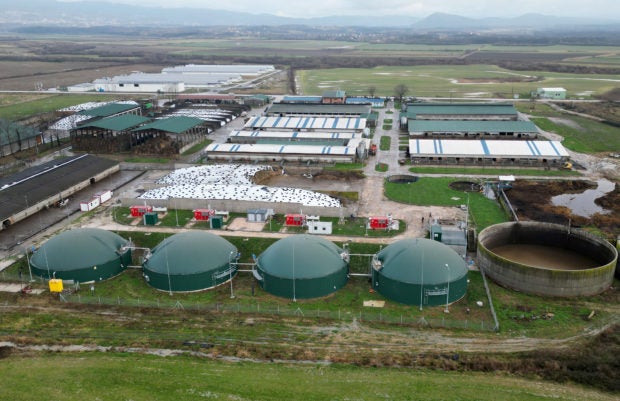 KALESIJA, Bosnia — A high-tech dairy farm is among the first in Bosnia turning biogas from animal faeces and silage into electricity, as it aims to become self-reliant at a time when high energy prices pose a risk to the subsidy-dependent agricultural sector.

The project at Spreca farm, in the north of the coal-rich Balkan country, is in line with the government’s efforts to gradually switch its energy production to renewable sources.

It is able to produce more electricity in an hour than the average household consumes in a month. Energy production started in September, operating at 50%-60% capacity due to regulatory requirements, but it will be able to produce 600 kilowatts per hour once fully operational.

It comes at a time when prices of fertilizers, food and energy have spiked following Russia’s invasion of Ukraine.

The idea to turn the mixture of cow and chicken faeces, corn silage and other organic waste available at the farm into biogas was born almost a decade ago, farm director Said Karic said.

It is the first such project in Bosnia’s autonomous Bosniak-Croat Federation, according to Karic and project leader Mirsad Tursunovic.

“It was envisaged to crown the existing processes at the farm,” Karic said at the farm owned by the Sarajevo Milkos dairy industry, which covers 800 hectares of its own and leased land and has capacity for 2,000 high-yielding cattle.

The scheme at the farm, which already uses automation and high tech machinery, is government-backed and funded by Sarajevo Milkos.

“This is a step towards aligning with the European standards … and represents an economic model that can be developed to increase the economics of the business, bearing in mind that primary agriculture production is low profit,” Karic added.

Bosnia, where energy production accounts for about 20% of its GDP, is the Balkans’ sole electricity exporter, with about 60% of it produced from coal-fired plants and the rest mainly from hydropower.

Its two regions, the Bosniak-Croat Federation and the Serb Republic, have pledged to increase the share of energy produced from renewable sources by 2030 but the energy crisis triggered by the war in Ukraine has slowed those plans.

The thermal energy created during the fermentation of the biogas is also used to heat some farm buildings.

“Our long-term plan is the construction of greenhouses that would be also heated by this thermal energy,” Karic said.

We are drowning in plastic, and we need to catch up fast