The NBA metaverse keeps rolling with the release of NBA All-World. It’s a mobile game from Niantic, the creator of the hit game Pokemon GO.

It encourages people to roam their neighborhood to challenge nearby NBA stars. Win to recruit them to your team, then compete against fellow players to climb the leaderboards.

Also, people may encounter Drop Zones outdoors with accessories for their players, such as jerseys, balls, and shoes.

How do you play NBA All-World? 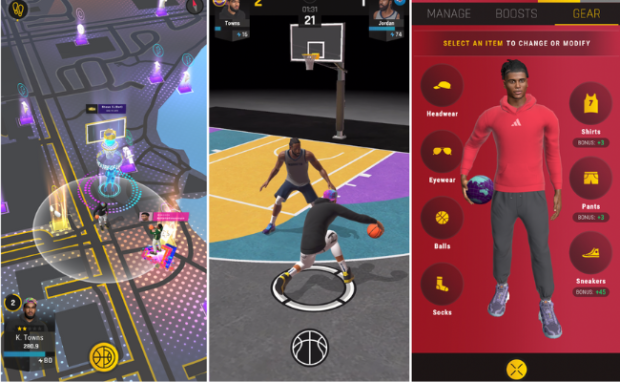 You may download the game on Android and iOS for free. Then, you create an account and an avatar.

Make sure your drip is on point by picking the right look for your character. Fortunately, the game has plenty of starting options; you will find more later.

NBA All-World borrows numerous features from Like Pokemon GO. For example, it provides a map of your local area showing nearby players and goodies.

Your avatar represents you on the map, and it faces according to your phone’s orientation. Instead of catching digital pets, you challenge NBA players in one-on-one matches.

You could play three-point shootouts and other timing-based minigames. The former involves tapping a basketball icon when a slider reaches a specific point to score points.

One of the other games has your character driving to the hoop while your opponent tries to block you. You have buttons that help you evade the opponent and do a lay-up.

Win matches to recruit players for your team. Your team will level up and improve their stats as you get more Ws (wins).

Eventually, you can rise through the ranks and compete in your local leaderboard. Be #1, and fellow players will see your name featured in that area.

It is a skill-based game, but your performance depends on two resources: food and drink. You will have a harder time scoring points if your character is hungry or thirsty.

You may replenish your hunger by heading to nearby restaurants. Also, you can quench your thirst by going to local convenience stores.

Gamers may also encounter Drop Zones while roaming around their neighborhood. These areas contain new items like jerseys, shoes, and balls.

Alternatively, you may purchase these items at fitness brands like Nike and Adidas. Even better, the online selection reflects their real-life merchandise.

How Does Metaverse Gaming Work?

Gaming company Niantic puts a unique spin on Pokemon GO with NBA All-World. The mobile game is a new way for basketball players to explore their love of the sport.

The game is free to download and install, but it has microtransactions. For example, you could pay to increase the offense and defense stats.

Technology continues to shift daily life as augmented reality, and its other aspects improve further. Fortunately, Inquirer Tech can help you keep up with the latest digital trends.