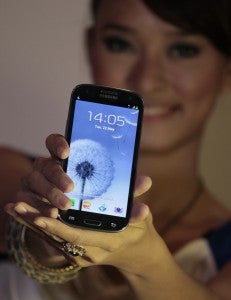 A model displays a Samsung Galaxy S III, the latest smartphone in the company's Galaxy lineups, during its launching for media in Jakarta, Indonesia, Tuesday, May 22, 2012. Samsung said the phone, that has emerged as the biggest competitor to the iPhone, will go on sale in 145 countries with 296 phone companies, making it the company's biggest launch so far. (AP Photo/Dita Alangkara)

NEW YORK — There’s a form of extra-sensory perception called psychometry, whose practitioners claim to learn things about objects by touching them. Smartphones set to be released this month by Samsung and Sony will have some of that ability: they’ll learn things when you touch them to pre-programmed “tags.”

For example, you can program a tag with your phone number, and stick it on your business card. When someone taps their phone to the card, the phone would call you. Or you can put a tag on your night stand. Place the phone there, and it goes into “alarm clock” mode, holding your calls until the morning.

Samsung Electronics Co. announced this week that it will be selling these tags in the form of stickers it calls “TecTiles” — $15 for 5 of them. They’ll work with its new flagship Samsung Galaxy S III smartphone, set to launch in a few weeks, and several others already in the market, including the HTC EVO 4G LTE sold by Sprint Nextel.

Sony Corp.’s Xperia Ion, to be released June 24, will come with the ability to read different coin-like plastic tags that read “Home,” ”Office” and so forth. The tags cost $20 for four, and the phone can be programmed to react differently to each tag. The “Car” tag can launch a navigation application, for instance. Tapping “Home” can send a text message to the rest of the family that you’re home, and set the ringer volume to maximum.

The big push behind the technology, which is known as Near-Field Communications, comes from companies that see the phone as the wallet of the future. When touched to payment terminals, NFC-equipped phones can act as credit or debit cards.

But turning phones into credit cards is a tall order. Mobile payments already work with a few phones, but broad adoption is being held up while cellphone companies, banks, payment processors and retailers work out who pays for what and who benefits.

This ability to sense things close by is made possible by a new type of communications hardware in phones, complementing long-range cellular radios, medium-range Wi-Fi and short-range Bluetooth.

The latest version of Google Inc.’s Android software, known as Ice Cream Sandwich, comes with the ability to use NFC to communicate from phone to phone. When the backs are tapped together, the owners can trade information like contacts.

Samsung takes this one step further with the Galaxy S III. Tap two phones together, and they set up a connection via Wi-Fi. That means the owners can walk away from each other, and as long as they’re in the same room or so, they can transfer photos and even hefty video files between their phones.

There are issues to work out. The Samsung tags can be read by any phone running “Ice Cream Sandwich,” but that doesn’t include the Sony phone. Samsung and HTC phones won’t recognize the Sony tags.

Apple Inc., whose iPhones are trendsetters in many ways, hasn’t built NFC into them —yet. Its patent filings hint at an interest in NFC, but they’ve given no clue when the technology might show up in iPhones.

Nick Holland, an analyst with Yankee Group, believes NFC will shine first in non-payment applications, because they’re easier to sort out, and the technology has many uses. There have been NFC trials in Sweden, using phones as hotel room keys, he points out. Another compelling use case would be Wi-Fi hotspots. A cafe that wants to limit access to the local hotspot might let patrons tap their phones against a tag instead of having them laboriously enter a password.

“There’s been an over-focus on the wallets,” Holland said. “It’s a technology that’s not designed purely for payments.”

For advertisers, NFC tags could replace the so-called “QR” codes — two-dimensional bar codes that need to be photographed with specially downloaded software to be deciphered, so they can send a consumer to the advertiser’s website or earn them a coupon for a discount. QR codes work at a distance, unlike NFC tags, but have significant drawbacks.

“Someone described them as ‘digital vomit’ recently. You can’t make them look pretty,” Holland said.

Each NFC tag includes a tiny chip, which explains the relatively high prices Samsung and Sony are charging. Those prices will come down, Holland said, as adoption rises. QR codes, of course, have the advantage of being very cheap, since they can be created on a simple printer.

The big makers of NFC chips are NXP Semiconductors N.V., a Dutch company, and Inside Secure, a French one. But competition is looming, Holland said, from bigger chip companies like Broadcom Corp. and Texas Instruments Inc.

“Basically, anyone who’s making chips is looking at NFC as a new area they could move into,” Holland said.

TOPICS: Near-Field Communications, NFC-equipped phones, Psychometry, Samsung, Samsung Galaxy S III, smartphones, Sony
Read Next
Samsung, Apple get most smartphone profits–survey
EDITORS' PICK
BFP raises general alarm over Mandaluyong fire
Someone from the Philippines can become $356 Million richer this Tuesday
Cherry Mobile teams up with Cloud Panda PH, launches online store
Leveling up your ‘lutong bahay’ with the kitchen companion you never knew you needed
Bato de la Rosa, Risa Hontiveros back bill increasing female recruitment quota in PNP
Quarantine violations still punishable despite deleted provisions in ‘Bayanihan 2’ – Bato dela Rosa
MOST READ
‘If I had not been SolGen, I will make you eat your words,’ Calida tells Coco Martin
5 car dealership outlets shutting down
51 percent of German firms holding back investments in PH, but not because of COVID-19
Quarantine passes no longer required under GCQ, but curfew remains
Don't miss out on the latest news and information.