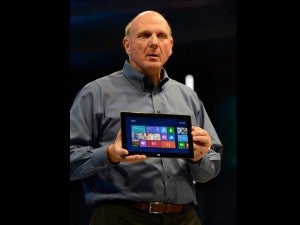 Chief executive Steve Ballmer described the iPad challenger – complete with a built-in stand and ultrathin covers-cum-keyboards in a range of colors – as a tablet that “works and plays.”

No prices or release dates were given, but the Surface was expected to go on sale in the fall, with retail prices “competitive with a comparable ARM tablet or Intel Ultrabook-class” computers, Microsoft said.

There were spontaneous bursts of applause and whoops from tech journalists and bloggers as key features of the new tablet, which has a slightly bigger screen than the iPad, but in wide-screen movie-style 16:9 format.

There was also one nerve-jangling moment for Windows Live Division chief Steven Sinofsky, when the first Surface model he was demonstrating failed to respond to a touch command. To his relief, a replacement worked immediately.

“It feels natural in your hands,” he told the invite-only event, shrouded in secrecy reminiscent of Apple icon Steve Jobs, and held in a venue underlining cutting-edge design values, traditionally not Microsoft’s strong point.

“It’s a whole new community of computing devices from Microsoft,” Ballmer said. “It embodies the notion of hardware and software really pushing each other.”

The Surface features a flip-out rear “kickstand” to prop it up like a picture frame and can be combined with a 3mm-thick Touch Cover that, when opened, acts as a keypad so tablets could be switched into “desktop” mode.

There is also a 5 mm-thick Type Cover with moving keys for a more traditional typing feel.

The keypad-cover attaches with a magnetic clasp familiar to iPad users, combining to feel like a book in weight and form, as confirmed when journalists were briefly given a brief chance to hold the device after the presentation.

“We designed this like a book. This spine feels like a book,” Michael Angiulo, vice president for Windows Planning, Hardware & PC Ecosystem told the audience.

Microsoft did not specify when the tablet would be available but it is likely to be timed with the release of Windows 8 software later this year.

“It puts the focus on the consumer rather than the enterprise,” she continued in a blog post. “And it lets Microsoft compete with vertically-integrated Apple on more even ground.”

Microsoft, which built its fortune by specializing in software and leaving the job of making computers or other devices to partners, has had mixed results from its hardware ventures.

Microsoft has occasionally weighed in with more significant hardware when it appeared that rivals were running away with the market.

The company’s most successful effort in devices has been its Xbox gaming console, in contrast to its failed music player known as Zune.

Microsoft this month unveiled a SmartGlass application that developers can use to synch iPads or other tablet computers to Xbox 360 consoles.

Microsoft discontinued Zune hardware last year. But it continues to operate its Zune service offering online music, films and other entertainment content, weaving it into the offerings available on Internet-linked Xbox 360 videogame consoles.