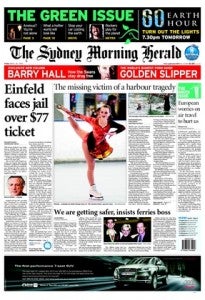 SYDNEY—A shakeup which will see Australia become the first country in the world with all its flagship newspapers behind an Internet paywall has prompted declarations that the “golden age of newspapers is dead.”

But analysts are divided on whether the digital-focused overhaul of media giant Fairfax—the only major rival Down Under to Rupert Murdoch’s News Limited—sounds a death knell for newspaper journalism in Australia.

Fairfax sent shockwaves through the media sector on Monday by announcing it would sack 1,900 members of its staff and put the online versions of its metropolitan Sydney Morning Herald and The Age broadsheets behind a paywall.

The newspapers themselves will be scaled down to tabloid format and two printing presses shut as the hemorrhaging company, which is being circled by mining magnate Gina Rinehart, attempts a radical online transformation.

News Limited is widely expected to unveil its own brutal print streamlining which will cost up to 1,500 jobs, underscoring the digital era’s demolition of traditional readership and revenue models.

Fairfax’s third-largest stakeholder, funds management group Allan Gray, has warned that the company’s main metropolitan dailies face closure, describing them as “already worth less than nothing.”

A former editor of The Age, Michael Smith described the reforms as the biggest announcement in a century for Australia’s heavily consolidated newspaper sector, which is 70 percent owned by Murdoch.

Fairfax is no stranger to the user-pays model: Its business daily, The Australian Financial Review, was among the first in the world to go behind a paywall in 2006.

It has been a costly experiment, according to University of Melbourne media researcher Andrea Carson, with 30,000 readers jumping ship in the last three or four years, forcing a lowering of subscription costs and easing of filters.

Murdoch’s flagship national daily, The Australian, went behind a paywall late last year and his best-selling Melbourne Herald Sun tabloid followed suit, though Carson describes them as being at an “experimental” stage.

Offshore titles have moved to a paid content model with varying degrees of success—niche publications like The Financial Times and Wall Street Journal have tended to flourish according to another former The Age editor, Andrew Jaspan.

The great gamble for news providers is whether larger revenues can be made from selling subscriptions to their websites or by leaving the content free and demanding more from ever-dwindling advertisers based on their traffic.

Jaspan said Murdoch’s London title, The Times, had been relatively successful with the first approach—shrinking their audience from 200,000 daily visitors to around 40,000 paying customers.

Others, such as The New York Times, have seen success with the “freemium” model being pursued by Fairfax which offers a mix of free and subscription content, but Jaspan said “nobody’s quite got (the model) right.”

The fact that a majority of Australia’s broadsheets will be behind a paywall is not seen as a guarantee of success; news and commentary will always be available for free at the website of public broadcaster ABC.

Readers are also increasingly bypassing mainstream media to go straight to the source on a story as governments and firms respond to increasing demands for openness and sporting codes set up news sites for their fans.

David McKnight of the University of New South Wales’ Journalism and Media Research Center said the industry was in “uncharted waters.”

“No one knows yet whether having paywalls and subscriptions will work for general as opposed to specialist newspapers,” he told Agence France-Presse.

McKnight said Murdoch was watching developments at Fairfax closely and had reportedly been in contact with Rinehart, an outspoken iron ore heiress who is now the media firm’s largest investor following a series of share raids.

Russian billionaires were making similar plays in Britain and tycoons like Warren Buffett were eyeing media assets in the United States, where McKnight said mastheads were closing so frequently a “Newspaper Death Watch” site had been set up.

“We’re getting a revival of an old-style media mogul with a difference—in the old days making money was the object, today it’s more purely getting influence,” McKnight said.

Jaspan described it as a “tectonic” moment for the Western media, with powerful forces triggering massive job losses and office closures, and 200 publications going under in Britain in the past five years alone.”

“The decline and implosion of the media was seen as a European or American disease that Australia would avoid, much like the global financial crisis,” he said. “This perfect storm has been brewing for some time.”