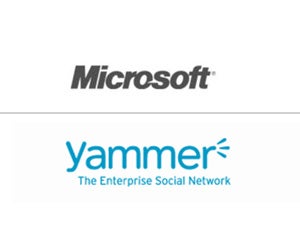 SAN FRANCISCO — Microsoft on Monday announced a billion-dollar deal to buy startup Yammer which specializes in social networks for businesses.

Microsoft said that it will pay $1.2 billion in cash for Yammer, which will become part of the US technology titan’s Office Division.

Yammer was launched in San Francisco in 2008 and enables companies to make private networks that let employees communicate Twitter-style while keeping exchanges away from public viewing.

Yammer has more than five million users, including workers at 85 percent of the Fortune 500 companies, according to Redmond, Washington-based Microsoft.

Microsoft said that it planned to promote adoption of Yammer’s service tied to complementary offerings of software or services such as SharePoint, Skype, and Office 365.

“When we started Yammer four years ago, we set out to do something big,” said Yammer chief executive David Sacks.

“We had a vision for how social networking could change the way we work,” he continued.

“Joining Microsoft will accelerate that vision and give us access to the technologies, expertise and resources we’ll need to scale and innovate.”

A key attraction of Yammer for Microsoft was that unlike rival services sold by business software firms such as Oracle or Salesforce.com, Yammer spread virally by being free for people to use to collaborate with co-workers.

“We love the way Yammer built on a notion that things could grow virally,” Ballmer said. “Consumerization of IT (technology at work) is a trend that, more than any other company out there, Yammer has gotten right.”

Yammer offers a free basic service and then gives companies the option of paying for premium versions offering administrative controls, security tools, analytics and other features.

“One of the remarkable things about our viral adoption is that it is completely voluntary by employees who bring it into a company,” Sacks said in a conference call with press and analysts.

“But when it happens in a grassroots way, companies are usually delighted,” he continued. “They usually want questions answered about security and premium tools but the results by-and-large are very positive.”

Ballmer acknowledged that the price for Yammer was higher than what Microsoft tends to spend to acquire technology but said that he was confident companies will back it once workers begin using the service to collaborate on the job.

Yammer will also become a selling point for key Microsoft business software at the heart of the company’s money-making empire.

Analyst Trip Chowdhry of Global Equities Research was unimpressed with the Yammer acquisition, saying that Microsoft is “too late to the social party.”

“We don’t think there is a third slot left for Microsoft,” Chowdhry said in a note to investors. “A company cannot get into leadership position by imitating the leaders, which in this case are Salesforce.com and Oracle.”

The Yammer buy comes as traditionally business-focused Microsoft adapts to the trend of consumers influencing, if not dictating, which gadgets they use on the job as well as in personal lives.

In recent weeks Microsoft took the bold step of unveiling its own tablet computer to challenge the Apple iPad, which has become a common work tool.

The coming version of Windows 8 operating software is designed to power devices ranging from desktop computers to smartphones or tablets with special attention to touch-screen controls made popular by Apple gadgets.

“But today the focus is on what we are doing for business social networking.”