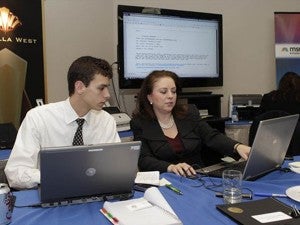 The analysis of Sarah Palin’s emails over the past few days may end up teaching us more about the future of journalism than about the former Alaska governor’s past.

Drawing on methods used by both Wikileaks and social networks, traditional news organizations such as The New York Times and The Washington Post used the Palin email dump as an experiment in new media techniques. They sought collaboration from readers and posted massive volumes of documents online before reporters even had a chance to read most of the papers.

That sort of public coordination — often called “crowdsourcing” — has drawn increasing interest from many journalists. David Lauter, chief of Tribune Co.’s Washington bureau, said he and his colleagues have wondered whether it would be a more productive way of analyzing data.

“It’s a concept that we’d been looking at,” Lauter said. “This seemed like a great opportunity to test to see how it might work.”

Tribune dispatched two journalists equipped with portable scanners to Juneau to pick up the thousands of Palin emails and begin digitizing them for online readers. Lauter said the first batch was posted on the Los Angeles Times website about 30 minutes after the documents were released Friday.

The New York Times, using a similar strategy, assigned a team to put all the documents online as soon as possible. It took 14 hours to post all of them.

Technologically, the project seemed to succeed. Several outlets organized the files chronologically and made the documents searchable. The Associated Press made electronic scans available to members around the country.

Neither the crowdsourcing nor the traditional analysis by reporters produced any bombshells, but enlisting the public did help engage readers. The New York Times received more than 2,000 emails, about half of which were substantive responses. Most of the annotations attached to Palin’s emails came from readers, not reporters.

Jim Roberts, an assistant managing editor at the paper, said the paper still considers crowdsourcing experimental, but the public responses were clearly useful.

“The readers are augmenting the work of our journalists, not taking their place,” Roberts said in an email. “We’re not doing anything that we wouldn’t otherwise do. The readers are just an extra, and valuable, resource.”

Steve Doig, a journalism professor at Arizona State University who specializes in computer-assisted reporting, said the crowdsourcing approach was clever — and one he hopes to see more of in the future.

With an increased focus to share documents online, media outlets have been seeking out new ways to compile and analyze information. A few months ago, the AP internally assessed thousands of emails sent to Wisconsin Gov. Scott Walker and raised questions about his claim that most people who contacted him wanted to eliminate nearly all union rights for state workers.

In 2009, The New York Times publicly posted hundreds of pages from the calendar of Timothy Geithner — now President Barack Obama’s treasury secretary — from his time at the New York Federal Reserve Bank.

Journalists and observers said the conditions were ripe for using crowdsourcing with the Palin emails because the documents were so voluminous. And they were released to many media outlets at the same time, meaning there was no reason to horde them in hopes of identifying an exclusive.

Reporters had been seeking the Palin emails for nearly three years — ever since she was selected as John McCain’s running mate in 2008. Alaska public records law requires agencies to respond within 10 working days, but it took the state far longer to compile, review and release Palin’s correspondence.

Palin’s use of private email addresses to conduct state business made the job more complicated and stirred interest in the messages.

As the release date grew closer, Palin continued to be the focus of speculation about a potential 2012 White House bid. And the number of news organizations seeking the emails also grew. That led to a scrum of reporters arriving Friday in Juneau to pick up boxes containing 24,000 documents and hurry them off to be digitized.

The documents offered a glimpse into Palin’s methods as governor, showing her engaged in day-to-day duties, concerned about her image and protective of her family. It also captured the speed of her rise to the center of national politics.

Tim Crawford, treasurer of Palin’s political action committee, encouraged everyone to read the emails and said they showed a governor hard at work. Meanwhile, other Palin supporters questioned whether the news media were unfairly targeting her in a massive rush to analyze the documents.

Stacy Drake, an editor and contributor at the pro-Palin website Conservatives4Palin, said the email databases were clearly a fishing expedition and could potentially be called a witch hunt. She thought it was ridiculous to post emails from every aspect of Palin’s time in office, as opposed to investigating a specific issue or topic and posting documents related to that.

“You have to sit back and ask: ‘Who else are they doing this with?'” Drake said. “I think if she were a Democrat, her treatment would be different.”

Doig disagreed but said he’d like to see such scrutiny for all public candidates and hopes it becomes commonplace.

Mike Oreskes, AP’s senior managing editor for U.S. news, noted AP filed more than 1,000 records requests in each of the past two years, including many related to other governors and the Obama administration. He said the news cooperative plans to continue pressing to obtain the records of other presidential contenders.

“Palin is one of many office holders whose public record and leadership the AP has sought to illuminate by obtaining emails, memos and other documents,” Oreskes said.