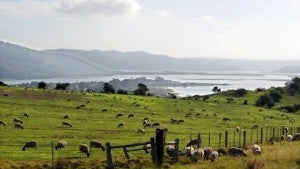 CAPE TOWN—A South African farmer is fielding phone calls from his sheep, after equipping them with cell phones to keep tabs on the flock amid recent livestock thefts, according to local press Wednesday.

When the sheep call, it is always bad news for farmer Erard Louw of the Cape Town suburbs, as the phones around their necks are only set to switch on when the sheeps start running, a sign thieves have cut through the fences.

“As they run it gives me a phone call and says ‘sheep one’ or ‘sheep two’ and so on, so at least I know where to start looking because the farm is 750 hectares (1,850 acres),” Louw told daily The Cape Times.

Louw attached the phone-like security device to the collars of four sheep in separate flocks after thieves snuck in and stole 27 sheep and 13 lambs a couple weeks ago, driving Louw to rack his brain for ways to protect his animals.

He said there was no use calling nearby police, as they were stationed too far away and in his experience either lacked an available car or the vehicle was out of fuel or missing tyres – also, incidentally, the work of thieves.

According to Louw, the cell phones have already proved their muster, with one sheep-snatcher caught thanks to the device.

Still, with theft attempts currently at their peak, given the long winter nights and early nightfall, a few sheep-robbers managed to get away, despite the device.

“The phone did start ringing that night and I went out,” he said, but added that he was too late.