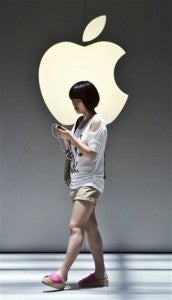 A woman walks near the Apple logo outside an Apple store in Shanghai, China on July 2, 2012. Apple has revolutionized retailing experience with the elimination of cash registers. Instead, a sales clerk carrying a mobile point-of-sale (POS) terminal will come to the customer and accept cash or card payments. AP PHOTO

If you step into an Apple store in the United States, don’t bother looking for a cashier when making a purchase because you won’t find any.

In the last few years, Apple has revolutionized retailing experience with the elimination of cash registers. Instead, a sales clerk carrying a mobile point-of-sale (POS) terminal will come to the customer and accept cash or card payments.

But what if you have gadgets like those wireless POS terminals shrinking into the size of an i-Shuffle that can be hooked up into one’s mobile phone that can in turn transform into a mobile cash register? That allows the mobile phone or tablet to accept credit card payments in the most unimaginable instances—like paying the pizza delivery boy, making or accepting donation, shopping in a bazaar, paying the masseur or an emergency doctor doing a home service and even buying from the nearby sari-sari store or the palengke (wet market).

US-based global payments solution company Visa has announced that it will make such wireless mobile payment solution—which has been introduced in the United States—available in Asia-Pacific this year.

“It will revolutionize the way we receive cards.”

Visa has actually invested in a start-up mobile payments solution company co-founded by American software genius Jack Dorsey—more popularly known as the inventor of micro-blogging site Twitter and whom some people see as a younger version of the late Steve Jobs. In 2010, Dorsey’s Square Inc. unveiled “Square” a one-inch mobile device that attaches to iPhone, iPad or Android devices via the headphone jack that becomes a mini-card reader. This allows a person to swipe his credit card or ATM card, choose an amount to give to the recipient and then sign up for confirmation.

Square is also a system for sending paperless receipts via text message or e-mail and is available as a free app for iOS and Android.

The best part of it is that this Square device costs only $9.95 which makes it accessible to a broader clientele base.

Think small, medium and micro-enterprises or even individuals doing businesses on the sides like the byaheras (travelers who hawk imported goods) or enterprising merchandisers selling goods on installment.

Technically, it’s a gadget that can even be used—as what’s now happening in major US cities—to pay one’s cab fare.

Given its exponential potential, it’s understandable why Visa invested in Square, as this gadget can greatly stimulate the usage of cards and gain a bit of market share compared to cash, which is still “the king” these days.

“So this is, to be quite frank, revolutionizing who can accept cards in the US and who can accept cards as we move in the future,” Jamieson says. “Can you imagine the sari-sari stores with this? This isn’t a $300 POS with an IP [Internet protocol] connection to the bank. One only needs a smartphone and buy this gadget, put it in, sign an agreement, swipe card and use the mobile phone’s broadband connection to complete payment.

This system has built-in analytics. It can track sales, collect tips and tax, and send electronic receipts via e-mail or text message.

For security purposes, the distribution of these cards in the future will have to be done in partnership with banks. After buying the gadget, the merchant needs to download the application, which becomes a merchant service agreement, give his bank account details and thus satisfy banks’ know-you-customer requirements.

Apart from Square, there are other manufacturers now of similar devices in Europe, some of which even have the capability to accept cards with EMV chips (EMV is a global standard for inter-operation of integrated circuit cards to boost). I-Zettle, which is headquartered in Stockholm, Sweden, fashions itself as a “social payments company.” It was founded in 2010 by entrepreneurs Jacob de Geer and Magnus Nilsson and later funded by Index Ventures, Greylock Partners, Creandum, Northzone and MasterCard.

If and when these types of technology come to the Philippines, however, one key challenge will be access to smartphones, which in time could be addressed with the entry of low-priced smartphones. Cellphone penetration may be high in the Philippines but not all the devices in town are iPhones or Blackberrys.

Another issue is the reliability of broadband signal by cellphone providers especially for prospective rural transactions. During off-site events such as bazaars, one banker says the POS terminals plugged to cables would still be more reliable than the wireless devices even within Metro Manila. Again, the infrastructure upgrade by cellphone companies should address this constraint in the future.

Likewise an issue is the fee charged by the payment channels, which is the same issue why some people opt for cash in the first place.

In the United States, for example, it costs 2.75 percent per swipe of Square for Visa, American Express and MasterCard and Discover. However, there are no contracts, monthly fees or merchant accounts. Funds are deposited into the merchant’s bank account the next day.

But credit card experts say they don’t see any reason why this mobile payments solution won’t gain ground in the Philippines, which is populated by a lot of technology-savvy young people who are comfortable with innovative payments solutions.

Since the first POS terminals were introduced in the ’80s, they have stood there as a fixture for 30 to 40 years. The black box got smaller, acquired a chip reader but is the same physical device that sits on the corner, says Jamieson.

“In the last couple of years, there has been a revolution in acceptance and what we’re looking now is being able to provide acceptance devices to enable the likes of individuals like you and me or small businesses to be able to accept cards directly without having to create or pay for a POS,” he says.

As i-Zettle puts it, this device could be key to boosting “person-to-person and business-to-consumer commerce.”