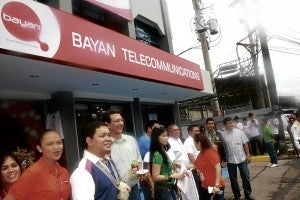 Bayan and Naga City executives at the inauguration of the newly refurbished office of Bayan in Naga City. PHOTO BY JONAS CABILES SOLTES

NAGA CITY—How do you sell a landline service in the time of Facebook? One of the largest telecommunications firms in the country is confident it will find the answer.

In fact, the Lopez-owned Bayan Telecommunications Inc. (Bayan) remains bullish on the future of its landline or voice service even as it pursues the expansion of its Internet or data service to keep up with the exponential growth of social networks, said Juan Jose de Jesus, marketing head of Bayan.

De Jesus was in Naga on June 28 for the inauguration of the refurbished office of Bayan in Barangay (village) Tinago in this city.

The three-story building, which now has the standard look of Bayan offices all over the country, houses the corporate office, and network and customer operation centers in Bicol Region of the telecommunication firm.

De Jesus said the landline service of Bayan would stay but admitted that Internet services would soon overtake it.

“Most of us are fond of social networking because of the free communication that it offers so Bayan is complementing that, without giving up the voice service,” said De Jesus.

He said the voice service remained a cheap way to develop a “deeper” connection with people, especially loved ones, and so it would always be essential.

De Jesus also said that the housing boom had been keeping the landline service’s head above water amid the social networking boom.

A landline is deemed essential in households, as it is a reliable and affordable way to connect to the outside world, especially in times of emergency.

“As long as there are people building homes and starting families, the landline service will survive,” said De Jesus.

But to keep up with tightening competition, not so much with other telecommunication firms but with social networking sites, Bayan has bundled its landline service with its digital subscriber line (DSL) Internet service.

Every consumer can now have landline phones while being connected to the Internet. 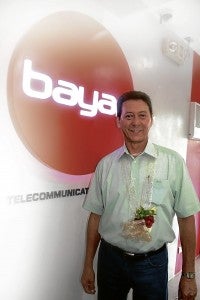 But voice as a stand-alone service would remain, said De Jesus.

Bundling it with Internet services is just the most efficient way to sell to people the importance of landline phones while recognizing the growing accessibility of social networking sites, he explained.

Through the bundling of services, Bayan hopes to remain a major player in Bicol, Easter Visayas and Southern Mindanao, said De Jesus.

Raffy Aguado, chief operating officer of Bayan, who was present during the inauguration of the Naga office of Bayan, said that Bayan leads in landline telephone services in Bicol.