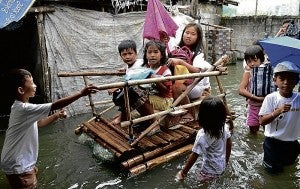 Children find ways to get to school in Obando as floods submerge houses, roads and government offices in the Bulacan town where, residents say, floods are part of daily life. ROGER TANGONAN/CONTRIBUTOR

CITY OF MALOLOS—Somewhere in the Internet is a website devoted to “Obandonado” (a play on the Filipino word abandonado, meaning abandoned or forsaken), which is an online crusade by Obando residents to discourage others from leaving town to escape the seasonal floods in this coastal Bulacan town.

“Obandonado,” which is an open group in the social networking site Facebook, was created on June 7 this year and has since attracted 1,530 members.

The skies have started to clear and the heavy rains have stopped in the province on Thursday in the wake of Typhoon “Gener,” but Obando residents continue to live in flood waters that, at its deepest, are about 5 feet.

Mercy Dolorito, former village chief of Barangay Salambao in Obando, said the floods at the town center on Monday was chest-deep.

The waters have started to recede in Obando’s coastal villages on Thursday, she said.

But calamities like this forced Perfecto Raymundo, 78, a resident of Barangay San Pascual, to leave Obando for good. He said the floods could soon render extinct the fertility ritual for which Obando had become famous. Women praying for children come and dance in the streets of Obando during the May festival.

Nica Gonzaga, a member of the Facebook group “Obandonado,” wrote: “This is irritating! Job is scarce in Obando and if you find one in other places, you will still be bothered every time there are floods. I failed to go to work. This is really irritating.”

Gov. Wilhelmino Sy-Alvarado has been urging the national government to release funds to improve Obando’s dikes and elevate its roads.

Glen Reyes, provincial engineer, said many of the road projects have been started but have been slowed down by the bad weather.

A P48-million dike, being developed by the Department of Public Works and Highways, offers a solution to the flooding.

But like other town projects, even surveys for the dike had been rescheduled due to the rains, said Gene Leano, deputy of Bulacan’s second engineering district office.

Elpidio Avena, Obando town engineer, said the proposed concrete dike would have a span of 11 kilometers.

Felicisima Mungcal, provincial disaster risk reduction and management council head, said Obando is the first town in Bulacan to complain about floods whenever a storm hits the province.

She said high tide and rains worsen the situation, keeping Obando’s 11 villages submerged for a week.

Mungcal said the tide also brought floods to the capital Malolos, the City of Meycauayan and the towns of Calumpit, Marilao, Hagonoy, Paombong and Bulacan. With a report from Tonette Orejas, Inquirer Central Luzon