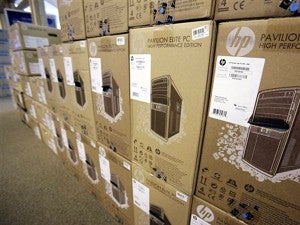 Hewlett-Packard CPUs ready for shipping from California. Against Oracle, it has become a ‘battle of the titans’ scenario. AP

SAN FRANCISCO — Hewlett-Packard Co. has sued its friend-turned-foe Oracle Corp. in another sign of how badly the relationship between the information technology big shots has frayed.

The lawsuit, filed Wednesday in Santa Clara County Superior Court, accuses Oracle of behaving illegally in deciding that future versions of its database software won’t support a particular line of HP servers. Those servers use a chip called Itanium that Oracle insists is being phased out, a claim the chip’s maker, Intel Corp., denies.

The argument centers on a technical issue that reflects a broader fissure between the companies.

Oracle and its outspoken CEO Larry Ellison are trying to take more turf from longtime partner HP, which is recovering from scandal. The rivalry ratcheted up last year when Mark Hurd was forced to resign as HP’s CEO and wound up working for his friend Ellison as an Oracle co-president. The hiring prompted HP to sue Hurd, alleging he couldn’t do the job without divulging HP trade secrets. That lawsuit was settled.

The latest dustup shows that the animosity between the companies continues to grow.

The dispute involves a chip that has been mocked for a decade — one sneering nickname for Itanium is “Itanic” — because it has failed to transform the semiconductor world the way Intel and HP originally envisioned. Still, HP machines built on the chip have found some customers, and Oracle has worked closely with HP to make sure that its software is compatible.

Itanium’s demise has been a source of speculation for years, but Oracle now claims it has evidence that Intel plans to phase out the product.

“Intel’s plans to end-of-life Itanium will be revealed in court now that HP has filed this utterly malicious and merit-less lawsuit,” Oracle said in a statement. An Intel spokeswoman reiterated the company’s earlier statements that it continues to develop Itanium.

In the lawsuit, HP accuses Oracle of anticompetitive behavior, breaking a promise to continue supporting Itanium machines and of the use of “strong-arm tactics to coerce customers into replacing their HP servers with Sun servers they do not want.” Oracle’s foray into the computer hardware market — an HP stronghold — began with its $7.3 billion acquisition of struggling server maker Sun Microsystems last year.

“This case arises out of Oracle’s failure to live up to a clear and simple promise to work with HP in the interests of both companies’ mutual customers,” HP said in the lawsuit. “In a mere eight months, Oracle has gone from arm-in-arm ‘partnership’ with Hewlett-Packard to bitter antagonist.”

Oracle says that its formal agreement with HP does not include a guarantee of continued support for Itanium-based servers.

HP is seeking financial damages and an order prohibiting Oracle from pulling its support from Itanium computers. It is asking for a jury trial to resolve the matter.

Many portions of the lawsuit are redacted, including descriptions of several of the complaints, so it’s unclear if it contains more serious allegations. HP warned Oracle last week that it would sue if Oracle didn’t reverse its decision on Itanium. HP spokesman Bill Wohl said that the “silence has been deafening” from Oracle’s lawyers since the letter.