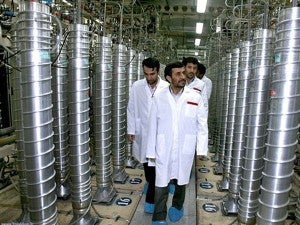 Like a kid in a candy store. Iranian President Mahmoud Ahmadinejad, center, at the Natanz Uranium Enrichment Facility some 200 miles (322 kilometers) south of the capital Tehran, Iran, which is under International Atomic Energy Agency, IAEA, monitoring (AP Photo).

TEHRAN, Iran — Iran has launched a satellite into the earth’s orbit, state television reported, in a feat that is likely to raise concerns among those who fear Iran’s intentions and nuclear development program.

The report said the locally produced satellite, called Rasad, or observation, was launched successfully by a Safir missile on Wednesday. There was no independent confirmation of the launch or of the satellite achieving orbit.

It would be the second satellite Iran has put into orbit. The first, named Omid, was launched in 2009.

Iran’s decade-long space program has raised alarms in the West, because the same technology that allows missiles to launch satellites can be used to fire warheads. Israel, the U.S. and others charge that Iran is trying to develop nuclear weapons. Iran denies that.

The TV report said the Rasad satellite, developed by Iran’s aerospace agency, weighs 34 pounds (15.3 kilograms) and has been designed to orbit the earth 15 times a day at the height of 160 miles (260 kilometers).

Iran has made a series of claims about advances in its ambitious space program in recent years, which has Western powers worried about the possibility of its military applications.

Last year, Iran announced it had successfully launched a rocket carrying a mouse, turtle and worms into space.

Iran’s space program has expressed a goal of putting a man in orbit within 10 years, despite the expense and technological challenge involved.

Iran is showcasing its technological successes as signs it can advance despite the threat of U.S. and U.N. sanctions over its nuclear program.

It is also pressing ahead with its military missile program, frequently testing missiles capable of reaching Israel, U.S. bases in the Gulf and parts of southeast Europe.

Iran has said it wants to put its own satellites into orbit to monitor natural disasters in the earthquake-prone nation and improve its telecommunications. Iranian officials also point to America’s use of satellites to monitor conflicts in Afghanistan and Iraq and say they need similar capabilities for their security.