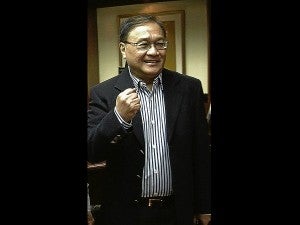 At the sixth annual Internet & Mobile Marketing Association of the Philippines (IMMAP) Summit on Friday, Pangilinan said the public may now “follow” him as @iamMVP on Twitter.

It is unknown whether the 66-year-old plans to “share” photos of his breakfast to his followers (6,931 to be exact as of 3:30 p.m. on Friday). So far, Pangilinan’s Twitter account follows only one other user–@Interaksyon, the account of TV5’s online news portal Interaksyon.com.

Pangilinan’s first tweet: “Just came from #IMMAPSummit2012 What a group. The new movers and shakers. Thank you for having me. I’m glad it’s over, what a relief :)”
In his speech, entitled “Why my Heart is Digital,” Pangilinan showed a lighter side of his personality, singing his own version of Youtube hit “Call Me Maybe.”

The usually stern and serious executive’s version went like this:
“Hey, I just met you –
and this is crazy.
But here’s my Twitter –
Follow me … maybe?”

The usually-stern Pangilinan also surprised the audience with several Internet-related “pick-up” lines. “Even my humor has gone digital,” Pangilinan said.

Pangilinan, however, made sure his speech never got lost in the humor. He said PLDT was ready to embrace the “digital tsunami” that in some cases eats into the company’s own revenue stream as applications like Skype and Facebook replace traditional voice calls and text messaging.

“Our strategic response to this ‘digital tsunami’ is to embrace, rather than resist it. We all know the worlds of telecoms, Internet and media are converging. We want to be at the heart of that convergence, because that is precisely the space where new and exciting opportunities lie,” he said.

“This represents the first point of our convergence – and underlies our investments in media – TV5, Cignal TV, Philippine Daily Inquirer, Philippine Star and Business World,” he said.
The group’s media investments are held by MediaQuest Holdings, a subsidiary of PLDT’s Beneficial Trust Fund.